History
Palgrave Studies in the History of the Media
Free Preview 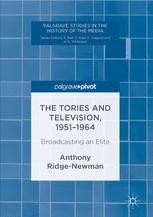 This book explores the role of television in the 1950s and early 1960s, with a focus on the relationship between Tories and TV. The early 1950s were characterized by recovery from war and high politics. Television was a new medium that eventually came to dominate mass media and political culture. But what impact did this transition have on political organization and elite power structures? Winston Churchill avoided it; Anthony Eden wanted to control it; Harold Macmillan tried to master it; and Alec Douglas-Home was not Prime Minister long enough to fully utilize it. The Conservative Party’s relationship with the new medium of television is a topic rich with scholarly questions and interesting quirks that were characteristic of the period. This exploration examines the changing dynamics between politics and the media, at grassroots and elite levels. Through analysing rich and diverse source materials from the Conservative Party Archive, Anthony Ridge-Newman takes a case study approach to comparing the impact of television at different points in the party’s history. In mapping changes across a thirteen year period of continual Conservative governance, this book argues that the advent of television contributed to the party’s transition from a membership-focused party to a television-centric professionalized elite.

Anthony Ridge-Newman is both a scholar and practitioner in media and politics. His teaching and research in this interdisciplinary field are based in the School of Social and Political Sciences at the University of Glasgow, UK. In 2014 he published Cameron’s Conservatives and the Internet with Palgrave, which Alexander Smith, Assistant Professor, University of Warwick, endorsed as ‘breaking new ground’.

“Ridge-Newman sets out to demonstrate not simply the ways that television has served as a means of political communication, but also the extent to which developments in television broadcasting have influenced the structure of political parties. ... Ridge-Newman’s argument, which is intelligent and persuasive. … He has undoubtedly … produced a book that would be equally at home on the bookshelves of political scientists and media historians. The Tories and Television is a fascinating and worthy read.” (Antony Mullen, LSE Review of Books, blogs.lse.ac.uk, May, 2017)

“Anthony Ridge-Newman's book is a scholarly and entertaining analysis of the Conservative Party's early relationship with television. It is an important account of a transformational period in British politics. Ridge-Newman chronicles the Tories' initially cautious adaptation to television in the days of postwar austerity, which developed into mastery of the medium after the bellwether election of 1959.” (David Jones MP, Secretary of State for Wales 2012-14, UK)

“Rarely can the benefits of examining the political past to understand the present have been as amply demonstrated.  Drawing upon a period of rapid development, Ridge-Newman combines appreciation of contemporary debates around the influence of media with a scrupulous understanding of the culture of the Conservatives.  The developing dynamics between media and political institutions will now be clearer.” (Dr Michael Higgins, University of Strathclyde, UK)

“In this excellent book, Anthony Ridge-Newman continues the work he began in Cameron’s Conservatives and the Internet (2014). He now explores the relationship between the Tories and, another important new medium, in its time, television. In analysing the role television played in the transformation of Conservative Party organization in 1951-64, Ridge-Newman reveals the complex and fascinating dynamics of change and tradition. His much needed and well-written study scrutinizes how the advent of television altered the internal dynamic between Tory elites and the party’s grassroots, thus transforming their approach to political campaigning.” (Dr Mari K. Niemi, Senior Researcher, Centre for Parliamentary Studies, University of Turku, Finland)

Book Title
The Tories and Television, 1951-1964
Book Subtitle
Broadcasting an Elite
Authors
Series Title
Palgrave Studies in the History of the Media
Copyright
2017
Publisher
Palgrave Macmillan UK
Copyright Holder
The Editor(s) (if applicable) and The Author(s)