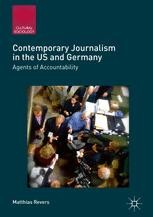 Contemporary Journalism in the US and Germany

This book challenges the idea that Western media systems are becoming more American in the digital age, arguing that journalistic cultures are not only significantly different from each other still but also variably open and resistant to change. Drawing upon extensive field research of political reporters and examination of discourses of journalistic professionalism as well institutional analysis, this book finds that occupational norms and values of journalism in the US are vigorously upheld but in fact relatively porous and malleable. In Germany, by contrast, professional boundaries are rather strong and resilient but treated matter-of-factly. Revers argues that this is both a consequence of institutional arrangements of media systems and historically evolved cultural principles of journalism in both countries which mutually constitute each other.

Matthias Revers is Senior Researcher and Lecturer in Sociology at the University of Frankfurt, Germany. His articles have been published in the Journal of Communication, Journalism: Theory, Practice & Criticism, and Media, Culture & Society.

“Matthias Revers has written a terrific cross-national ethnographic study of political news reporting in two leading democracies. He draws out the similarities and differences between Germany and the United States with compelling observations and quotes, and he explains his findings with a sophisticated blend of cultural sociology and field theory. Revers is sometimes critical, but never cynical: one comes away from this book with a renewed appreciation of how much civic values still matter for journalists, in profound and meaningful ways that affect all of us.” (Rodney Benson, Professor of Media, Culture, and Communication, New York University, USA, and author of “Shaping Immigration News”)

“This is first-rate scholarship. Cross-national studies of the news media are unusual; those based on ethnographic research are rare indeed. This rich, well-conceived, and deeply thoughtful work illuminates both German and American journalistic values and practices. It’s a treasure!” (Michael Schudson, Professor of Journalism and Adjunct Professor of Sociology, Columbia University, USA)

“No one is foolish enough to think of news media as a transparent window into political action, but few consider the national differences in how the work that journalists do to construct mediated realities for their readers.  This study of local political reporting in Albany and Munich unpacks German and American reporters’ beliefs about professionalism, objectivity and fairness to explain significant differences in how they walk the line between facts and opinion.” (Myra Marx Ferree, Alice H. Cook Professor of Sociology, University of Wisconsin, USA, and co-author of “Shaping Abortion Discourse”)