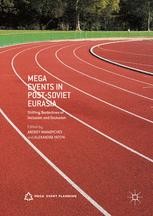 Shifting Borderlines of Inclusion and Exclusion

The edited volume explains why sport mega events can be discussed from the viewpoint of politics and power, and what this discussion can add to the existing scholarship on political regimes, international norms, national identities, and cultural narratives. The book collects case studies written by insiders from different countries of post-Soviet Eurasia that have recently hosted— or intend to host in the future —sporting events of a global scale. Contributing authors discuss cultural, political, and economic strategies of host governments, examining them from the vantage point of an increasing shift of the global sport industry to non-Western countries.  Mega-events often draw domestic lines of cultural and social exclusion within host’s polities. It is these ruptures and gaps this volume explores, contributing to a better understanding of the intricate interconnections between global institutions and national identities.

Andrey Makarychev is Professor of Politics and Governance at the University of Tartu, Estonia. He has published on a variety of topics related to Russian foreign policy, including a co-edited volume titled Russia's Changing Economic and Political Regimes (2013), Russia and the EU in a Multipolar World (2014), and a contributing chapter in Russia's Foreign Policy (2015).  He has published research articles in major peer-reviewed international journals such as Problems of Post-Communism, Journal of International Relations and Development, Europe-Asia Studies, Journal of Eurasian Studies, Demokratizatsiya, and European Urban and Regional Studies.
Alexandra Yatsyk is Carnegie Research Scholar at the George Washington University’s Institute for European, Russian and Eurasian Studies, USA and Head of the Center for Cultural Studies of Post-Socialism at the Kazan Federal University, Russia. She is a co-editor of a special issue of Sport in Society (2015) and the author of several book chapters and articles, including Russia's Foreign Policy (2015), European Urban and Regional Studies, Problems of Post- Communism, International Spectator, and Digital Icons.

“Much-needed and overdue, this book brings some transparency into the opaque hosting of mega-events in post-Soviet countries. Demonstrating a fine conceptual edge, it shows how mega-events are much more than big sports extravaganzas: sources of rent extraction, political sledgehammers, instruments of legitimation.” (Martin Müller, Professor at the University of Zurich and co-editor of “Global games, local rules: mega-events in the post-socialist world” (2015))

“The papers collected in this volume provide a timely and engaging look at the use of sports mega-events by non-Western states. As such, Mega Events in Post-Soviet Eurasia offers a much needed counter-point to the burgeoning extant literature on the political use of sports megas by focussing on the less well researched area of post-Soviet Eurasia.” (Jonathan Grix, Reader at the University of Birmingham, author of “Sport Politics: An Introduction” (2015) and “Sport Under Communism: The East German Experience”, (2012))

“Nothing illustrates the sweeping ambitions of Vladimir Putin’s Russia than the mega-event, and the mega-projects to build the stadiums, hotels and transit networks required to play host to the world. From the Winter Olympics in Sochi to the World Cup in 2018, the pursuit of the international games have shaped the nation’s identity and served as the means for the distribution of its rents – regardless of the economic, social or environmental costs. And Russia is not alone. The quest for international recognition, for validation of authoritarian political systems, has become a defining feature of the entire post-Soviet space.” (Steven Lee Myers,  author of “The New Tsar: The Rise and Reign of Vladimir Putin” ( 2015))