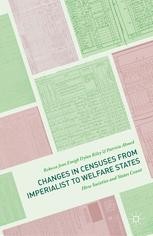 Changes in Censuses from Imperialist to Welfare States

How Societies and States Count

Changes in Censuses from Imperialist to Welfare States , the second of two volumes, uses historical and comparative methods to analyze censuses or census-like information in the United Kingdom, the United States, and Italy, starting in England over one-thousand years ago.

"In this magnificent volume, Emigh, Riley, and Ahmed overturn many of the theoretical models of modern census-taking. Drawing on extensive primary and secondary sources, they compare the histories of the US, British, and Italian censuses and show that they were not simply mechanisms of state control. Rather, they reflected a complex interaction among political elites, civil society, and census experts, with different outcomes in different countries. This will be a key text in the field." - Edward Higgs, Professor and Head of Department, History, University of Essex, UK

"This book provides an informative survey of modern censuses in Italy, the United Kingdom, and the United States. It brings together state-centered and society-centered perspectives to demonstrate the vibrancy of censuses that inhabit the nexus between state and society. The authors convincingly argue that censuses rely not only on state power but on lay categories that regular people understand. They combine historical and comparative methods to discuss fascinating debates over race, class, region, and eugenics." - Kathrin Levitan, Associate Professor of History, College of William and Mary, USA

"This comparative assessment of the history of the census in Italy, the United Kingdom, and the United States makes wonderful use of vast body of research. The authors convincingly use a historical approach to interpret the evolution of population counts as the result of the different ways that states and societies interact. Thus, the authors highlight the unintentional effects of actors' long-run choices, going beyond the short-term perspective that often characterizes social sciences." - Giovanni Favero, Associate Professor, Department of Management and Economic History, Università Ca'Foscari, Venice, Italy