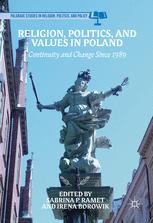 Religion, Politics, and Values in Poland

Continuity and Change Since 1989

This volume brings together leading scholars to examine how the Church has brought its values into the political sphere and, in the process, alienated some of the younger generation. Since the disintegration of the communist one-party state at the end of the 1980s, the Catholic Church has pushed its agenda to ban abortion, introduce religious instruction in the state schools, and protect Poland from secular influences emanating from the European Union. As one of the consequences, Polish society has become polarized along religious lines, with conservative forces such as Fr. Rydzyk’s Radio Maryja seeking to counter the influence of the European Union and liberals on the left trying to protect secular values. This volume casts a wide net in topics, with chapters on Pope John Paul II, Radio Maryja, religious education, the Church’s campaign against what it calls “genderism,” and the privatization of religious belief, among other topics.

Sabrina P. Ramet is Professor of Political Science at the Norwegian University of Science and Technology (NTNU), in Trondheim, Norway.  Born in London, England, she earned her PhD in political science at University of California, Los Angeles, USA in 1981. She is the author of 12 scholarly books and editor or co-editor of 32 previous books, including Religion and Politics in Central and Southeastern Europe:  Challenges since 1989 (2014).
Irena Borowik is Professor of Sociology in the Institute of Sociology, Jagiellonian University, Poland.  She earned her PhD in sociology at the Jagiellonian University in 1988.  She is the author, editor, or co-editor of numerous books, including Religion, Churches, and Religiosity in Post-Communist Europe (2006).

“The book would be very helpful to all scholars interested in the modern political and social history of Poland. … The book will help readers to understand the many dimensions of the relationships between Church, state, and society in post-communist Poland. It is an important addition to the field of east and central European studies.” (Andrew Savchenko, Slavic Review, Vol. 78, 2019)

“Locating the role of the Churches in the conservative political shift in Eastern Europe is essential, not least in the case of Catholic Poland.  Leading scholars Ramet and Borowik have assembled an outstanding group of specialists on the Polish case, providing solid treatments of issues such as the EU, gender, and John Paul II, along with analyses and explanation of eroding religiosity in contemporary Poland.  A must read!!” (Robert F. Goeckel, Professor of Political Science & International Relations, State University of New York at Geneseo, USA)

“This is an amazing book, providing a thorough analysis of the role of religious faith and the all-powerful Catholic Church -- arguably the key player in the transformation of post-communist Poland from East Europe’s first democratic transition in 1989 and, now, a major force that has begun to assault these new democratic values and institutions.  The editors have brought together the best of Poland’s scholars on the Church as an institution and the values and commitment of its followers.  They, in turn, provide insight into various important topics ranging from the Church’s political theology and engagement to the very nature of Polish religiosity in the post 1989 years as the Catholic Church evolved from a popular counterbalance to communist rule to a conservative and increasingly authoritarian force in the polity.  This is a must read for anyone wishing to understand contemporary Poland.” (Jane Leftwich Curry, Professor of Political Science, Santa Clara University, USA)

“A collection of essays from leading specialists in the field, the book provides a detailed, rigorously researched and incredibly rich picture of Polish religiosity at the turn of the century.  The book brings together balanced and yet highly provocative discussions of a number of topical issues, from value conflicts over abortion and gender to forms of political engagement of the Catholic Church, offering an up-to-date, sophisticated perspective on the role of religion in contemporary Polish society.  The book also demonstrates how the Catholic Church, despite the social and political transformations of the post-communist era which led to pluralisation of the public sphere, maintained the position of moral authority and a high public profile.  This is essential reading for anyone interested in Polish religion and, more generally, contemporary Polish culture, society and politics.” (Maciej Potz, Associate Professor of Political Science, University of Łódź, Poland)