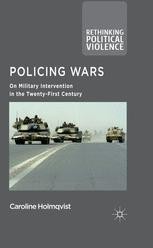 On Military Intervention in the Twenty-First Century

Holmqvist presents an original account of the relationship between war and policing in the twenty first century. This interdisciplinary study of contemporary Western strategic thinking reveals how, why, and with what consequences, the wars in Afghanistan and Iraq became seen as policing wars.

'Contemporary liberal thought imagines war as a perpetual policing exercise, in which disorder is made into order. Demonstrating a command of theory few analysts of war can muster, Holmqvist shows how liberalism supplies a set of metaphors an intellectual

scaffolding encompassing time, space, agency and power through which war becomes a management tool for the restoration of the social contract in other peoples' countries. While real in its effects, such imagination amounts to an illusory construct of war, with results for all to see in Iraq and Afghanistan. Surpassing earlier analyses of liberal war in depth and sophistication, Holmqvist is now the definitive guide.'

'War without antagonism is one of the great oxymorons for our time. Holmqvist explores the sense in western military theory that war can be fought without ultimate opposition when it is about reducing disorder and policing good governance. Those who resist this oxymoronic post-adversarial logic get branded and punished as obstructionist criminal elements. Holmqvist stretches the concept of contemporary war as a form of policing liberal order by tracing its roots to pre-9/11 times and spaces and by theorising its depths today. She is a compelling and important new voice on the forms, logics and implications of today's western ways of warring.'