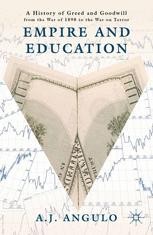 This book is about education and American imperialism from the War of 1898 to the War on Terror. Very little coordinated or sustained research has been devoted to the broader contours of America, education, and empire. And third, this volume seeks to inspire new directions in the study of American educational history.

A. J. ANGULO is an historian of education and an Associate Professor at Winthrop University, USA. He received his doctorate from Harvard University where he was a Teaching Fellow in history of education and history of science. At Winthrop, he teaches courses on the social, political, legal, and intellectual dimensions of America's educational past. Angulo is the author of William Barton Rogers and the Idea of MIT (2009).

"This magnificent book provides not only a thoughtful view of modern American history, but deep insight into a vital question: why does the United States feel such a drive to intervene in so many countries so far from our own shores? With vivid storytelling and magisterial knowledge, Angulo takes us on a century-long journey from the Spanish-American War to the War on Terror. Along the way, he uncovers themes that shape both our approach to the world and our national psyche." - Stephen Kinzer, author of Overthrow: America's Century of Regime Change From Hawaii to Iraq

"Empire and Education is the first comprehensive account of America's educational occupations abroad. It consists of a series of compelling narratives of the U.S. governments' successive efforts to remake other nation's educational systems in its own image and interests. Angulo shows how American educational debates were exported into foreign territories but then distorted by the power and interests driving the occupations. Beautifully written and unfailingly insightful, this book is the place to go to get a broad overview of the United States's history as an imperial power as well as an introduction to individual educational occupations from Puerto Rico to Iraq." - Julie Reuben, Professor, Harvard Graduate School of Education

"Angulo hits hard at the imperialist designs of the United States, in places like the Phillipines, Japan, Germany, Puerto Rico, Afghanistan, and elsewhere. He shows how education operates as an integral part of the imperialist effort. Readers should pay attention to, and heed, this compelling analysis." - Wayne J. Urban, Paul W. Bryant Professor of Education, The University of Alabama Tuscaloosa

"History of Education is sometimes mistakenly seen as a narrow subject, whereas, of necessity education policies are always intimately connected with the social and political world. A.J. Angulo's investigation of American imperialist ambition pays close attention to concomitant self-serving transformations of indigenous education systems. This is a largely shocking story that should be essential reading for historians and government alike." - Pam Hirsch, Faculty of Education, University of Cambridge

"While the history of the American empire is doubtless a story of greed and power, it's also one of American textbooks, civics lessons, and schoolmarms in foreign lands. Angulo deftly weaves these two stories together into a compelling, erudite, and much-needed history of imperialism and education abroad. Read, enjoy, and learn. I did." - Julian Go, associate professor of Sociology, Boston University

"This book is by far the most original and comprehensive treatment of the complex nature of education as a tool of American foreign policy. Angulo's writing is crisp, and his arguments are powerful." - Thomas G. Dyer, University Professor Emeritus, University of Georgia

"Angulo has written a provocative and timely cautionary tale. In this highly readable account, he takes a hard look at how greed has trumped goodwill far too many times when the United States has gone to war and become an occupying power with consequences that should concern us all." - Lisa Jarvinen, assistant professor of American Studies, La Salle University

"[Angulo] expands the record, reorders it, and breaks new ground. Strictly speaking, Empire and Education is not a hole-filling revisionist work. This story has never been told in exactly the same way. . . I see Empire and Education as a significant contribution to U.S. history that reorients standard treatments of education, shifting it from the wings to center stage. Along the way, it expands and deepens the history of education as a crucial specialization. There is nothing like it on the market." - Donald Warren, Professor Emeritus, Indiana University

"A.J. Angulo has gone where no historian has ventured before. Empire and Education's sophisticated and complex interpretation of American education as a global hegemonic force places American education within the geo-politics of world events. Simply groundbreaking." - Derrick P. Alridge, Professor, University of Virginia

Book Title
Empire and Education
Book Subtitle
A History of Greed and Goodwill from the War of 1898 to the War on Terror
Authors
Copyright
2012
Publisher
Palgrave Macmillan US
Copyright Holder
A. J. Angulo