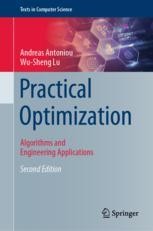 This textbook provides a hands-on treatment of the subject of optimization. A comprehensive set of problems and exercises makes it suitable for use in one or two semesters of an advanced undergraduate course or a first-year graduate course. Each half of the book contains a full semester’s worth of complementary yet stand-alone material. The practical orientation of the topics chosen and a wealth of useful examples also make the book suitable as a reference work for practitioners in the field.

In this second edition the authors have added sections on recent innovations, techniques, and methodologies.
Show all
About the authors

Prof. Wu-Sheng Lu received his B.S. degree in Mathematics from Fudan University, Shanghai, China in 1964, an M.E. degree in Automation from the East China Normal University, Shanghai in 1981, and an M.S. degree in Electrical Engineering and his Ph.D. in Control Science from the University of Minnesota, Minneapolis, n 1983 and 1984, respectively. He was a postdoctoral fellow at the University of Victoria, Canada in 1985 and a visiting Asst. Professor with the University of Minnesota in 1986. Since 1987 he has been with the University of Victoria where he is a full professor. His current teaching and research interests are digital signal processing and the application of optimization methods. He is the coauthor with Prof. Antoniou of Two-Dimensional Digital Filters (Marcel Dekker, 1992). He served as an Associate Editor of the Canadian Journal of Electrical and Computer Engineering in 1989, and Editor of the same journal from 1990 to 1992. He served as an Associate Editor for the IEEE Trans. on Circuits and Systems, Part II, from 1993 to 1995 and for Part I of the same journal from 1999 to 2001 and from 2004 to 2005. Presently he is serving as Associate Editor for the Intl. J. of Multidimensional Systems and Signal Processing. He is a Fellow of the Engineering Institute of Canada and the IEEE.