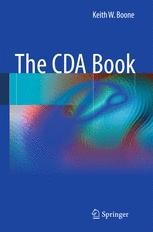 “The Clinical Document Architecture (CDA) is a common container for assembly of structured and unstructured information that does not require creating numerous standards for individual document types. What has been missing to date is the educational materials to make CDA accessible to everyone. This book contains the documentation, samples, and guidance needed to successfully implement CDA in real world applications.  It will accelerate adoption of CDA as a means to exchange structured data elements that not only capture the thought process of the encounter for care coordination but also can be stored as individual data elements for population health, research, and decision support.”   John D. Halamka MD, Chief Information Officer at Harvard Medical School

Keith W. Boone has been involved in the development of Health Level 7 standards including the HL7 Clinical Document Architecture since 2004.  He co-chaired the HL7 Structured Documents working group from 2007 to 2010, which is the home of CDA in Health Level 7 International.  He is presently a member at large of the HL7 Board.

Keith also co-chairs the Integrating the Healthcare Enterprise (IHE) Patient Care Coordination (PCC) planning committee which develops CDA Implementation Guides (which IHE calls profiles) for use internationally.  He co-chaired the technical committee of that group from 2006 to 2009.

He also participates in other standards organizations, including the US Technical Advisory Group to ISO TC-215, ASTM and Continua.

Mr. Boone is a Standards Architect for GE Healthcare, where he is currently employed, and represents GE Healthcare to numerous standard organizations.  He was introduced to IHE profiles and HL7 standards while working as a Chief Engineer at Dictaphone Corporation where he took on the role of leading that organization's efforts in standards.  Before he developed an interest in the HL7 Clinical Document Architecture, Keith was a Software Architect for eBusiness Technologies, an XML technology company.  There he was introduced to standards development, and worked alongside many of the co-chairs and developers of the XML specifications, including XML, XML Namespaces, XSLT, and XPath.