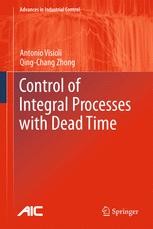 Integral processes with dead time are frequently encountered in the process industry; typical examples include supply chains, level control and batch distillation columns. Special attention must be paid to their control because they lack asymptotic stability (they are not self-regulating) and because of their delays. As a result, many techniques have been devised to cope with these hurdles both in the context of single-degree-of-freedom (proportional-integral-differential (PID)) and two-degree-of-freedom control schemes.

Control of Integral Processes with Dead Time provides a unified and coherent review of the various approaches devised for the control of integral processes, addressing the problem from different standpoints. In particular, the book treats the following topics:

• how to tune a PID controller and assess its performance;

• how to design a two-degree-of-freedom control scheme in order to deal with both the set-point following and load disturbance rejection tasks;

• how to modify the basic Smith predictor control scheme in order to cope with the presence of an integrator in the process; and

• how to address the presence of large process dead times.

The methods are presented sequentially, highlighting the evolution of their rationale and implementation and thus clearly characterising them from both academic and industrial perspectives. Control of Integral Processes with Dead Time will serve academic researchers in systems with dead time both as a reference and stimulus for new ideas for further work and will help industry-based control and process engineers to solve their control problems using the most suitable technique and achieving the best cost:benefit ratio.

Antonio Visioli received the Laurea degree in electronic engineering from the University of Parma, Parma, Italy, and the Ph.D. degree in applied mechanics from the University of Brescia, Brescia, Italy, in 1995 and 1999 respectively. His Ph.D. dissertation was on control strategies for industrial robot manipulators. From 1997 to 2005 he has been assistant professor and from 2005 he is associate professor of Automatic Control at the Department of Electronics for Automation, University of Brescia, Italy.

His research interests include industrial robot control and trajectory planning, input-output-inversion-based control and process control. In particular, industrial (PID) controllers have always been one of the main subjects of his research, as shown by a large number of publications in refereed journals and conference proceedings. Overall, he is the author or co-author of more than 100 papers in international journals and refereed conference proceedings and he is the author of the book Practical PID Control published by Springer. He cooperates with different companies (e.g. Whirlpool Europe and Yokogawa Italia) and universities. Dr. Visioli is a senior member of IEEE, member of IFAC and member of the national board of Anipla (Italian Association for the Automation).

Qing-Chang Zhong joined the Department of Electrical Engineering and Electronics, University of Liverpool as a Senior Lecturer in August 2005. He received his first Ph.D. degree in Control Theory and Engineering from Shanghai Jiao Tong University, China in 1999 and his second Ph.D. degree in Control and Power Engineering  from Imperial College London in 2004, winning the Best Doctoral Thesis Prize. He started his career in control engineering in 1990 after receiving his first degree. He joined the School of Electronics, University of Glamorgan as a Senior Lecturer in early 2004 and was promoted to Reader in May 2005. He is a Senior Member of IEEE, a Member of IET and UKACC.

He (jointly with his co-authors, when appropriate) has made significant contributions to control theory and time-delay systems and published a monograph, Robust Control of Time-delay Systems, with Springer in 2006. The majority of his research results in control were published in the top two international journals in systems and control: IEEE Transactions on Automatic Control and Automatica.

His other research interests cover automotive electronics, power electronics and renewable energy. He is leading an EPSRC-funded Network for New Academics in Control Engineering with more than 60 members, which aims to shape the future of collaborative research in control and related areas. He serves on the Technical Committee 2.2 (Linear Control Systems) of the International Federation of Automatic Control and has been on the Int. Program Committees of several international conferences. He has been invited to visit various institutions all over the world and hosted visitors from different countries. His research is funded by EPSRC and industrial partners.