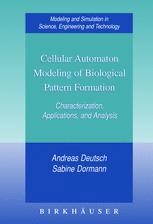 This book focuses on a challenging application field of cellular automata: pattern formation in biological systems, such as the growth of microorganisms, dynamics of cellular tissue and tumors, and formation of pigment cell patterns. These phenomena, resulting from complex cellular interactions, cannot be deduced solely from experimental analysis, but can be more easily examined using mathematical models, in particular, cellular automaton models.

While there are various books treating cellular automaton modeling, this interdisciplinary work is the first one covering biological applications. The book is divided into three parts: Part I deals with general principles, theories, and models of pattern formation; Part II examines cellular automaton modeling; and Part III explains various applications. The models and analytic techniques described may be extended to other exciting applications in biology, medicine, and immunology.

* Provides an introduction and historical account of the principles of biological pattern formation (morphogenesis)
* Gives an overview of mathematical modeling approaches to morphogenesis, and an introduction to cellular automata and analytic techniques
* A supplementary web-based Java applet---Cellular Automaton Simulator---enables interactive simulation of various cellular automaton applications described in the book; available on the internet at www.biomodeling.info
* Self-contained presentation is accessible to a broad audience; only basic calculus and linear algebra are required
* Careful balance of theory, models, and applications useful to both experimentalists and theoreticians
* Includes suggestions for further research topics

The book is aimed at researchers, practitioners, and students in applied mathematics, mathematical biology, computational physics, bioengineering, and computer science interested in a cellular automaton approach to biological modeling. The book's accessible presentation and interdisciplinary approach make it suitable for graduate and advanced undergraduate courses and seminars in mathematical biology, biomodeling, and biocomputing.

"Due to its ample usage, and for being a paradigm of how basic rules can indeed bring forth complex forms, the [Cellular Automaton (CA)] has undoubtedly established itself as a symbol of ‘creation by the simplest.’

…How can it be that two so very different methods, Partial Differential Equations…and CAs, which are essentially based on discretized space, time, and variables, can be utilised to approach the same topics, and furthermore, with the same underlying motivations? …Andreas Deutsch and Sabine Dormann address this question, by beautifully bridging the traditional gap between CAs and the more classic PDE description of the same biological problems. They construct this bridge by cementing the CA in a formalised mathematical language, while also delivering a broad overview on some of [the] applications of CAs and inserting it in an ontological context on developmental processes. …After reading Deutsch and Dormann’s work, one should be able to start using mathematical techniques in CA modelling.

…The authors offer a succinct, comprehensive history on the general concepts of the origin of patterns… In fact, chapter two is a true ‘history of pattern formation in 90 minutes,’ and, as such, astonishingly captures the basic breakthroughs in scientific and philosophical thought, charmingly offering a setting, both scientific as well as cultural, for those readers naïve in the field of development. …The authors lead the reader elegantly from the basic random walk to more elaborate applications involving cellular interactions…

Taken as a whole, the book under review fills a rather significant gap in the spatial modelling literature. It presents a unifying framework for mathematicians, physicists, and theoretical biologists. It is clear that Deutsch and Dormann’s book possesses great pedagogical value. Chapters end with proposed topics for further projects, rendering the book a good source of inspiration for courses on pattern formation in which computer simulations and methods are utilised. The effort the authors have invested in mathematically describing the CA and its interactions will certainly be very welcome to math students. …The book remains an ideal guide for someone with a mathematical or physical background to start exploring biological modelling. Importantly, it will also serve as an excellent guide for experienced modellers to innovate and improve their methodologies for analysing simulation results.

…Deutsch and Dormann strive to go beyond [an eye-balling] approach, and propose more quantifiable methods of analysis. This by itself is already of great importance to the field of biological modelling." —Mathematical Reviews

"This is a very well written book on how to use cellular automaton, and especially Lattice-Gas-based Cellular Automaton (LGCA), to model various biological phenomena such as schools of fish, pigment distribution in salamanders, and tumor growth. It is suitable for researchers interested in modeling pattern formation, in general, and CA, or Turing patterns, in particular. It is also well adapted for graduate (and advanced undergraduate) students.... There are lists of highly interesting possible future research projects. Such lists are very valuable and show both that the field itself has potential for further research and that the authors are generous in sharing such problems. The book is well suited for a graduate course. Indeed parts of it might even be used in an undergraduate course.... I especially like the way Deutsch and Dormann give the historical background [of the field].... The authors show that [cellular automaton modeling] is a useful concept with great potential in many areas, and that CAs are more than preliminary toy models compared to "real" partial differential equation (PDE) models."—Genetic Programming and Evolvable Machines

"This monograph is a volume in the series Modeling and Simulation in Science, Engineering and Technology edited by the prestigious Birkhäuser Publishing House. It is aimed to undergraduates and graduates students as well as experienced researchers in mathematical biology." (Alexandru Carausu, Iasi Polytechnic Magazine, Vol. 28 (1/4), 2006)