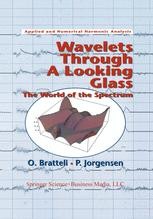 Wavelets Through a Looking Glass

The World of the Spectrum

"Mere words cannot adequately describe all the great features of the book...which has something for everyone of all mathematical persuasions.... This book has quite a different perspective from the other monographs on wavelets...mainly because it emphasizes the Fourier domain as the proper "window" or "looking glass" from which one can most easily study wavelet theory.... Whatever his or her level of expertise with the subject, a reader of this book will never be bored.... Each chapter begins with an introductory section accessible to the layperson, often containing some historical background, and often extremely entertaining.... This is a fun book, full of exciting new results, written by two world-renowned experts in the field, which makes connections between a variety of important areas in pure and applied mathematics."

"This is a quite unusual wavelet book, with a fresh view on the subject. While the vast majority of wavelet books concentrate on multiresolution analysis and its applications, this book treats the topic from an operator theoretic point of view, with a focus on techniques having a geometric or spectral theoretic flavor. In fact, while parts of the book could be used in a wavelet course, other parts would be suitable in a course directed towards operator theory."

"The authors take a fresh look at the subject and develop a new intuition for many topics. In particular, they make more extensive use of spectral theory than is usual in the subject. Each [chapter has] an introduction to the topics in the chapter and explains why they are discussed and where they come from. There are connections with many other areas of mathematics and physics not usually associated with wavelet theory . . . The end of each chapter has a large selection of problems in which much of the standard theory can be worked out by the reader. There is also a glossary of useful terms at the end of Chapter 1 where many of the terms . . . are clearly defined both from a mathematical and an applications point of view."

"This book does a superlative job of demonstrating the richness of the theory of wavelets . . . The authors have demonstrated further connections with spectral theory, ergodic theory, homotopy theory and the theory of probability . . . At the same time the material is beautifully documented by means of . . . figures . . . and illustrations . . . The pedagogy is further enhanced by several paragraphs of illuminating prose at the beginning of each chapter . . . Although not written as a conventional text, . . . an industrious graduate student could profit enormously from exposure to this book. With respect to the literature on wavelets, it is difficult to recall any other book that is so well documented both with graphical and numerical details as well as mathematical proof. This volume will remain a central work for many years to come."

"This book by Bratteli and Jorgensen serves as an introduction to the theory of wavelets and also a bringing up to date with the latest research problems. While there are many good books on wavelets, 'Wavelets Through a Looking Glass' brings a fresh perspective on the field. The theory is covered from the point of view of operator theory and functional analysis, with an emphasis on the connection between the spectral properties of the operators on the discrete data and the geometric features of the wavelet functions in the continuous counterpart. The book includes the now classical results of wavelet theory, such as the multiresolution construction and the correlation to the transfer operator, as well as some new results of the authors (published here for the first time), such as the index theorem or several spectral preperties of the  transfer operator." --- J. Operator Theory

"The book gives a general persetnation of some recent developments in wavelet theory, with an emphasis on techniques that are both fundamental and relatively timeless haveing a geometric and spectral-theoretic flavour. The exposition is clearly motivated and unfolds systematically aided by numerous graphics. Excellent graphics show how wavelets depend on the spectra of the transfer operators. Some new results are presented for the first time." ---EMS Newsletter