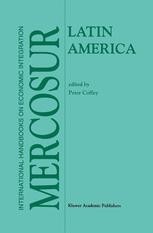 Latin America's experience with regional economic integration has been only slightly shorter than that of Europe. In fact, the first attempt at integration started as early as 1960, with the creation of LAFTA - the Latin American Free Trade Area (subsequently replaced by LAIA - the Latin American Integration Association). LAFTA, composed of 11 countries, sought, unsuccessfully, to create a free trade area in 12 years. In 1969, the Andean pact, which sought, also unsuccessfully, to create a sub-regional free trade area, was set up. Recently the Presidents of Argentina, Brazil, Paraguay and Uruguay signed the Treaty of Asuncion aimed at creating a common market as from 1st January, 1995. This common market, MERCOSUR, will be completed by 2006.
In comparison with the earlier and unsuccessful attempts at integration, and despite challenges and problems, both internal and external, MERCOSUR is working, and trade between the member States is increasing. Furthermore, as with the case of the European Union (EU), serious attempts (notably between Argentina and Brazil) are being made to co-ordinate economic and monetary policies. The most important evidence of these moves is the introduction of hard currencies, the reduction in the size of the public sector and the privatization of State assets. These are clearly exciting times for Latin American integration.
In this book, the first in a new series of books on International Economic Integration, the authors examine the experience of MERCOSUR in the Latin American integration progress. After an analysis of the history of the moves towards integration in South America, the case of each Member State and the Associate Country is examined and perspectives for the future are assessed.

Peter Coffey, a British national was until recently, Head of the Economics section at the Europa Instituut, University of Amsterdam. Presently he is Holder of the recently created U.S. West Chair at the Graduate School at the College of St. Thomas, Minnesota, USA. He has published many works on European and international economic and monetary problems. Professor Coffey, who speaks seven languages, has lectured in most countries of the EC, as well as in many other parts of the world.