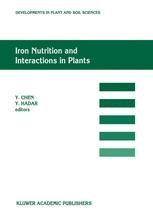 Iron Nutrition and Interactions in Plants

“Proceedings of the Fifth International Symposium on Iron Nutrition and Interactions in Plants”, 11–17 June 1989, Jerusalem, Israel, 1989

Many agricultural crops worldwide, especially in semi-arid climates, suffer from iron deficiencies. Among plants sensitive to iron deficiency are apples, avocado, bananas, barley, beans, citrus, cotton, grapes, peanuts, pecans, potatoes, sorghum, soybeans, and numerous ornamental plants. Deficiencies are usually recognized by chlorotic, in new leaves and are typically found among sensitive crops grown in calcareous or yellowed, interveinal areas soils which cover over 30% of the earth's land surface. Iron deficiency may lead, in extreme cases, to complete crop failure. In intensive agriculture on calcareous soils, iron often becomes a major limiting nutrient for optimal crop production, thus, correction of iron deficiency is required. Various chemicals and practices are available. They are, however, costly and do not always result in a complete remedy of the deficiency. Crucial questions relative to the cost-benefit equation such as the recovery rate of plants and the long-term fertilizing effect have not yet been resolved. The complexity of iron nutrition problems requires an understanding of the chemistry of iron oxides in soils, of the chemistry of both natural and synthetic chelates, of rhizosphere microbiology and biochemistry, and of the physiological involvement of the plant in iron uptake and transport.