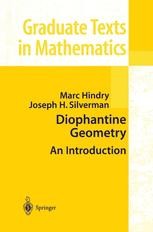 This is an introduction to diophantine geometry at the advanced graduate level. The book contains a proof of the Mordell conjecture which will make it quite attractive to graduate students and professional mathematicians. In each part of the book, the reader will find numerous exercises.

Together, Parts C--E form the core of the book and can be read by any reader already acquainted with algebraic number theory, classical (i.e., not scheme-theoretical) algebraic geometry, and the height machine. The authors write clearly and strive to help the reader understand this difficult material. They provide insightful introductions, clear motivations for theorems, and helpful outlines of complicated proofs.

This volume will not only serve as a very useful reference for the advanced reader, but it will also be an invaluable tool for students attempting to study Diophantine geometry. Indeed, such students usually face the difficult task of having to acquire a sufficient grasp of algebraic geometry to be able to use algebraic-geometric tools to study Diophantine applications. Many beginners feel overwhelmed by the geometry before they read any of the beautiful arithmetic results. To help such students, the authors have devoted about a third of the volume, Part A, to a lengthy introduction to algebraic geometry, and suggest that the reader begin by skimming Part A, possibly reading more closely any material that covers gaps in the reader's knowledge. Then Part A should be used as a reference source for geometric facts as they are needed while reading the rest of the book.

The first arithmetic portion of the book is Part B, which deals with the theory of height functions, functions which measure the "size" of a point on an algebraic variety. These objects are a key tool for the Diophantine study in Parts C--E, and the authors, in their characteristically clear and insightful style, fully prove in Part B most results on heights later used in the book.

The book concludes in Part F with a survey of further results and open problems, such as the generalization of Mordell's conjecture to higher-dimensional subvarieties of abelian varieties and questions of quantitative and effective results on the solutions of Diophantine problems.

This book is a most welcome addition to the literature. It is well written and renders accessible to students of Diophantine geometry some of the most elegant and beautiful arithmetical results of the 20th century."  (Dino J. Lorenzini, Mathematical Reviews)