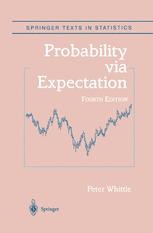 The third edition of 1992 constituted a major reworking of the original text, and the preface to that edition still represents my position on the issues that stimulated me first to write. The present edition contains a number of minor modifications and corrections, but its principal innovation is the addition of material on dynamic programming, optimal allocation, option pricing and large deviations. These are substantial topics, but ones into which one can gain an insight with less labour than is generally thought. They all involve the expectation concept in an essential fashion, even the treatment of option pricing, which seems initially to forswear expectation in favour of an arbitrage criterion. I am grateful to readers and to Springer-Verlag for their continuing interest in the approach taken in this work. Peter Whittle Preface to the Third Edition This book is a complete revision of the earlier work Probability which appeared in 1970. While revised so radically and incorporating so much new material as to amount to a new text, it preserves both the aim and the approach of the original. That aim was stated as the provision of a 'first text in probability, demanding a reasonable but not extensive knowledge of mathematics, and taking the reader to what one might describe as a good intermediate level' . In doing so it attempted to break away from stereotyped applications, and consider applications of a more novel and significant character.

"... a clear success in its unorthodoxy, Probability via Expectation has become a treasured classic."
P.A.L. Emrechts in "Short Book Reviews", Vol. 21/1, April, 2001

"Apart from presenting a case for the development of probability theory by using the expectation operator rather than probability measure as the primitive notion, a second distinctive feature of this book is the very large range of modern applications that it covers. Many of these are addressed by more than 350 exercises interspersed throughout the text. In summary, this well written book is a … introduction to probability theory and its applications." (Norbert Henze, Metrika, November, 2002)

"Originally published in 1970, this book has stood the test of time. … the text demonstrates a modern alternative approach to a now classical field. … The fourth edition contains a number of modifications and corrections. New material on dynamic programming, optimal allocation, options pricing and large deviations is included." (Martin T. Wells, Journal of the American Statistical Association, September 2001)