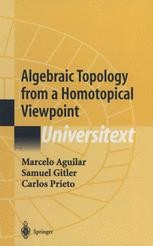 Algebraic Topology from a Homotopical Viewpoint

The purpose of this book is to introduce algebraic topology using the novel approach of homotopy theory, an approach with clear applications in algebraic geometry as understood by Lawson and Voevodsky. This method allows the authors to cover the material more efficiently than the more common method using homological algebra. The basic concepts of homotopy theory, such as fibrations and cofibrations, are used to construct singular homology and cohomology, as well as K-theory. Throughout the text many other fundamental concepts are introduced, including the construction of the characteristic classes of vector bundles. Although functors appear constantly throughout the text, no knowledge about category theory is expected from the reader. This book is intended for advanced undergraduates and graduate students with a basic knowledge of point set topology as well as group theory and can be used in a two semester course.
Marcelo Aguilar and Carlos Prieto are Professors at the Instituto de Matemticas, Universidad Nacional Autónoma de México, and Samuel Gitler is a member of El Colegio Nacional and professor at the Centro de Investigación y Estudios Avanzados del IPN.

"This is a basic course on algebraic topology and … it is excellently written and composed and can be strongly recommended to anybody wishing to learn the field. The reader can find many examples, calculations, and also a number of exercises. … The book has two appendices, … references consisting of 83 items and a long list of symbols. There are many remarks and comments making the orientation of the reader in the field of algebraic topology easier … ." (EMS, June, 2004)

"The modus operandi of algebraic topology is to associate algebraic invariants, such as groups or rings, to a topological space in such a way that equivalent spaces exhibit isomorphic invariants; here, ‘equivalent’ may be chosen to fit the geometry of the problem. In this book, ‘equivalent’ means homotopy equivalent … . For its clarity and directness, a welcome addition to advanced mathematics collections. Upper-division undergraduates through faculty." (J. McCleary, CHOICE, December, 2002)

"The purpose of this book is to introduce algebraic topology using the novel approach of homotopy theory … . The basic concepts of homotopy theory … are used to construct singular homology and cohomology, as well as K-theory. … Throughout the text many other fundamental concepts are introduced … ." (L’Enseignement Mathematique, Vol. 48 (3-4), 2002)