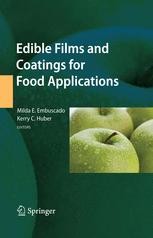 The edible film and coating industry is now a multimillion dollar industry. Less than $1 million in 1999, the market has grown to more than $100 million and was expected to grow to $350 million by 2008, according to James Rossman of Rossman Consulting. Pharmaceutical and consumer products have been responsible for the tremendous increase. This growth has produced an enormous amount of scientific articles, patents, and research projects undertaken by members of the food industry, academia, and research institutions.

Edible Films and Coatings for Food Applications brings together this vast wealth of scientific knowledge in a systematically organized volume. It examines the science, application, function, and market for edible films and coatings.

Kerry Huber is a Professor of Food Science and Toxicology at the University of Idaho, Moscow, Idaho.