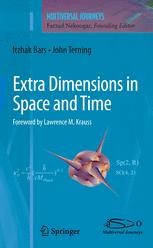 Extra Dimensions in Space and Time

"…The Multiversal book series is equally unique, providing book-length extensions of the lectures with enough additional depth for those who truly want to explore these fields, while also providing the kind of clarity that is appropriate for interested lay people to grasp the general principles involved."

The aim of this book is to continue to raise public awareness in the exciting field of theoretical physics and cosmology. It covers the latest theories at a level not weighed down by highly mathematical equations. Each chapter is written by a leading expert who is presently researching and lecturing on the topics.

Extra Dimensions in Space and Time has two main features that differentiate it from all other books written about the topic:

The first feature is the coverage of extra dimensions in time (Two-Time physics), which has not been covered in earlier books. All other books on the topic focus on extra spatial dimensions.

The second feature deals with level of presentation. The material is presented in a non-technical language followed by additional technical sections (in the form of appendices or footnotes) that explain the basic equations and formulas in the theories. This feature is very attractive to readers who want to learn more about the theories involved beyond the basic description for a layperson.

Professor Bars is a leading expert in symmetries in Physics, which he applies in much of his research on particle physics, field theory, string theory and mathematical physics in over 200 papers. He is the author of a book on "Quantum Mechanics" and co-editor of the books "Symmetry in Particle Physics" and "Strings '95, Future Perspectives in String Theory".  Some of his experimentally successful physics predictions include supersymmetry in large nuclei with even/odd numbers of nucleons, and the weak interaction contribution to the anomalous magnetic moment of the muon, in the context of the quantized Standard Model, that was confirmed after 30 years. His contributions to the mathematics of supersymmetry are extensively used in several branches of physics and mathematics.

His current interests include String Field Theory, and Two-Time Physics which he originated in 1998.  In 2006 he established that all the physics we know today, as embodied in principle in the Standard Model of Particles and Forces, is better described by a two-time field theory in 4 space and 2 time dimensions projected as a shadow on an emergent 3 space and 1 time dimensions. His honors include Fellow of the American Physical Society, the First Award in the Gravity Research Foundation essay contest (shared with Chris Pope), Outstanding Junior Investigator Award by the Department of Energy, and the A. P. Sloan Foundation Fellowship.

“Popular expositions of scientific topics have an important role in informing the general public of the nature/implications of current research. This is always a difficult task, especially for the highly abstract and very complicated topics addressed here. … Summing Up: Recommended. Upper-division undergraduates and graduate students.” (M. Coplan, Choice, Vol. 48 (2), October, 2010)

“The origin of this book lies in two public lectures given by the authors for a general public, under the auspices of multiversal journeys, a non-profit organization dedicated to disseminating knowledge on current theoretical physics to the general public. … It certainly is to be welcomed that leading theoretical physicists make an effort to communicate their research to the general public. This book demonstrates how to succeed in such an endeavour.” (Michael Kunzinger, Zentralblatt MATH, Vol. 1207, 2011)