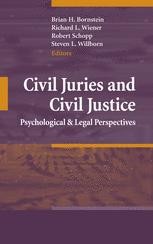 From Merck to McDonald’s to Firestone, high-profile tort cases inspire high-powered tort reform debate. Simultaneously they fuel public perceptions of spurious claims and outlandish awards, while fostering professional perceptions of an unwieldy legal system. The contributors to Civil Juries and Civil Justice bring order, as well as a much-needed reality check, to the situation. This insightful, multidisciplinary volume provides in-depth case data, empirical findings, and original research, synthesizing a range of seemingly irreconcilable legal and psychological viewpoints. Leading scholars consider the roots of juryphobia, the growth trajectories of damage awards, alternative means of obtaining civil justice, and the role of the social sciences in formulating legal policy while addressing these key questions of the tort reform controversy:

Civil Juries and Civil Justice will attract readers across numerous disciplines: forensic psychologists and psychiatrists, attorneys, sociologists, criminologists, political scientists, and policy makers. Because of its research/practice orientation, professors and students in these fields will find it a worthy text for course adoption.

Brian Bornstein has been an Associate Professor at UNL since joining the psychology department in 2000. He is a member of the law/psychology and cognitive psychology programs, as well as Associate Director of the law/psychology program. He received his Ph.D. in psychology from the University of Pennsylvania in 1991,and a Master of Legal Studies from the University of Nebraska in 2001. Dr. Bornstein's research efforts focus primarily on how juries, especially in civil cases, make decisions, and the reliability of eyewitness memory. Additional areas of focus are in applying decision-making principles to everyday judgment tasks, as in medical decision making and distributive justice. He teaches courses on human memory, psychology and law, decision making, and history of psychology at the graduate and undergraduate levels.

Richard Wiener received his Ph.D. from the University of Houston and his Masters Degree in Legal Studies at UNL. He was professor of Psychology at Saint Louis University (1982- 2000) and most recently chair of the Department of Psychology at Baruch College, City University of New York. In 2002 Dr. Wiener joined the Law-Psychology Program (as director) and the Social Psychology Program at UNL. He currently serves as the editor of Law and Human Behavior, the official journal of the American Psychology/Law Society (Division 41 of the APA). Dr. Wiener’s research applies theories of social cognition to problems in legal decision-making. Among the topic areas he has investigated are perceptions of sexual harassment, judgments of medical malpractice, and sociolegal jurisprudence. Currently Dr. Wiener applies dual process models developed in social psychology to explain juror performance in capital murder trials and to understand workers’ evaluations of sexual harassment claims. Other lines of research examine the way in which affirmative action laws influence perceptions of workforce quality, test the distinction between generic and specific prejudice in jury decision-making, test the role of implicit morality judgments in judges’ decisions in child neglect and abuse cases, and examine the role of emotion in judgments made by consumers who have filed bankruptcy. Dr. Wiener teaches courses at UNL on behavioral sciences and the law and legal decision making.

Robert Schopp practiced clinical psychology before turning to the study of law and philosophy in an attempt to understand some perplexing issues that he encountered during ten years of clinical practice. So far, he remains perplexed, but he likes to think that he is perplexed in a deeper and more comprehensive manner. He joined the University of Nebraska -College of Law in 1989 after completing the concurrent law/philosophy program at the University of Arizona. His primary areas of interest involve questions that lie at the intersection of law, psychology and philosophy. These issues tend to arise in criminal law, mental health law, jurisprudence and professional ethics.

Steven Willborn joined the faculty of University of Nebraska-Lincoln in 1979. He received his B.A. degree in 1974 from Northland College and his M.S. and J.D. (cum laude, Order of the Coif) degrees in 1976 from the University of Wisconsin. While in law school, he served as a member and editor of the Wisconsin Law Review. Professor Willborn was in private practice from 1976 to 1979. He has been a Fulbright Scholar at the Institute of Advanced Legal Studies, University of London (1985-86); a Visiting Scholar at the Australian National University in Canberra (1988), the University of Toronto (1991), and Lincoln College, Oxford University (1993); and a Visiting Professor at the University of Michigan Law School (1992). Professor Willborn has been licensed to practice law in Nebraska, Ohio and Wisconsin and to make cheese in Wisconsin. He teaches Employment Law, Labor Law, Legal Control of Discrimination, and Pension & Employee Benefits Law.