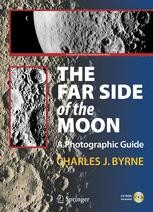 The Far Side of the Moon

This book is a companion to Byrnes's award-winning Lunar Orbiter Photographic Atlas of the Near Side of the Moon (Springer, 2005). It provides comprehensive coverage of the far side of the Moon, and is the first book that collects photographs from all five Lunar Orbiter missions: Clementine, Apollo, Luna, Zond, and Nozomi. As in the previous book, the scanning artifacts of the Lunar Orbiter photos have been cleaned.
The photographs show each part of the far side in the most favorable resolution and sun angle. There are many high-altitude oblique photos that provide a feeling of being in space; this book is more like a photographic tour of the far side than an atlas.  The striking differences between the near and far side have been a major mystery for astronomers but this book suggests an explanation: a massive early impact on the near side produced the Near Side Megabasin; an impact so large that its rim is on the far side. The floor of this basin established the canvas for the portrait of the Man in the Moon and its ejecta prepared the far side for the rugged array of basins and craters shown in these photos.
Since many professional and amateur astronomers direct their telescopes to the near side of the Moon; these photos provide a unique opportunity to become familiar with the far side!

Charlie Byrne worked as a systems engineer at Bellcomm, for support of the Lunar Orbiter project. He is currently carrying out research about the Moon, and was the discoverer of the gigantic "near side megabasin" that covers nearly all of the near side of the Moon and whose ejecta has established the shape of the far side of the Moon.

"Our name for the half of the Moon that doesn’t face Earth – the farside – conveys a feeling of unreachable distance and strangeness. The farside has remained poorly known and little in the thoughts of either amateur or professional astronomers. Partly that is because we have had few good images of it, and the existing ones are hard to use. Now Charles Byrne has assembled images from Lunar Orbiter, some from Clementine and a small handful from Soviet and Japanese probes to create a photographic guide to the lunar farside. Those familiar with his 2005 Lunar Orbiter Photographic Atlas of the Near Side of the Moon will feel at home in this companion volume. This Guide has the same advantages and drawbacks – it has a whole hemisphere of images in one convenient book, the annoying lines between Orbiter framelets have been removed, and there are interpretive captions. But the image scale varies from page to page, and it is difficult to find the pages for a feature of interest without using the names index. Few people other than professional lunar researchers probably need an atlas of the farside of the Moon, although it would spark interesting conversations when visitors spied it on a coffee table. But saying only professionals might need it ignores amateur astronomers and other dreamers who routinely buy books showing gorgeous views of features on Mars, which they will never see at the telescope. I am happy to add the new Byrne to my lunar library. But I also await a more homogeneous future atlas, perhaps compiled from Kaguya, Chang’e, and dare I hope, SMART-1 images. " Chuck Wood, LPOD (21 Jan 2008)

"This book covers the Moon’s dark side, and showcases many of the features imaged by the five US Lunar Orbiter probes of the mid 1960s. … Byrne, who worked on the Lunar Orbiter programme, has gone through the archives thoroughly, and his choice of images is excellent. … . All things considered, this is a thoroughly recommended lunar work." (Peter Grego, BBC Sky at Night, March, 2008)

"The atlas is divided into a number of chapters, each of which is introduced with an overview of a selected region, followed by detailed images and brief comments about significant features. … an excellent reference of interest both to professionals and to laypersons who appreciate the intricate patterns and beauty of lunar topography. Summing Up: Highly recommended. General readers; graduate students, researchers, and faculty." (D. E. Hogg, CHOICE, Vol. 45 (9), 2008)

"The atlas covers the whole of the Moon’s far side. The images have been skilfully ‘cleaned up’ … and they are beautifully reproduced as well as being annotated. … It is clear that the author has undertaken a tremendous amount of research, and the result is a book which must surely remain the standard in the foreseeable future. There is no other work which covers the subject so comprehensively or so well, and it should be included in every astronomical library." (Patrick Moore, The Observatory, Vol. 128 (1205), August, 2008)

"This photographic survey provides an accessible overview of facts, figures and views of the far side of the moon as collected over the past 50 years … . most interest to the amateur astronomer... ." (Contemporary Physics, Vol. 50 (2), March-April, 2009)