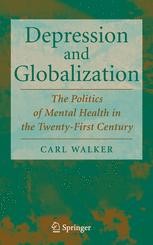 The Politics of Mental Health in the 21st Century

In the coming years the World Health Organization predicts that depression will rank just behind heart conditions in terms of the global disease burden. Yet, according to a provocative new book, mental health systems often reinforce the depressive disorders they aim to treat.

In Depression and Globalization, Carl Walker analyzes the human cost of recent political and economic events as main contributors to the rise of depression, particularly in the U.S. and Britain. Starting in the 1980s, income and educational disparities, financial and job insecurity—by-products of multinational business—have grown in parallel with increasing feelings of hopelessness and isolation. These sociopolitical stressors, Walker asserts, have not only added to the prevalence of depressive disorders, but have profoundly influenced their conceptualization and treatment. Balancing individual lives and societal health, the author identifies challenges rarely discussed in the mental health field, and steps the community can take to improve their outcome.

Depression and Globalization opens the debate with considerable insight, and clinicians, researchers, and policymakers will find in Walker’s work a powerful and timely prescription for change.

Dr. Carl Walker is a post-doctoral fellow based in the department of Mental Health Sciences at the University College-London. Dr. Walker currently manages a European-wide, EC-funded four year research project involving the identifcation risk factors for future episodes of depression for use in a General Practice context.

In addition, Dr. Walker reviews papers for Psychology and Health and books for the Royal Society for the Promotion of Health.

"This book is a personal treatise of depression and its relation to political and social events, especially in the United Kingdom and the United States since the late 1970s and early 1980s. … This book might appeal to those interested in the history of mental illness (mainly depression) and its relation to global events, including sociopolitical changes occurring constantly throughout the world." (Steven T. Herron, Doody’s Review Service, April, 2008)

"According to Walker … the neo-liberal economic policies that emerged in the 1980s and dominate the global market today have had a profound effect on the increase of depressive disorders in the US and the UK. In this volume intended for both general and academic readers, he discusses social and mental health trends, linking factors of globalization to a variety of disorders, also confronting its effects on how psychological science understands and treats them." (www.booknews.com, April, 2008)

"One measure of a book is its effect on the reader's outlook. Although Depression and Globalization obliquely addresses clinical depression, I found while reading it that I began to listen to depressed patients differently. I felt newly attuned to the alienating effects of consumerist society on their lives, on its disruption of their family and social lives." (John C. Markowitz, MD, JAMA, November 5, 2008-Vol. 300, NO. 17)