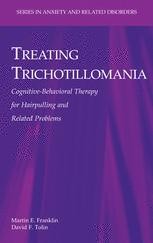 Trichotillomania has been described in the literature for at least a hundred years, but has only in the past decade received serious clinical attention. Although now a "higher profile" disorder, there is still scant clinical information on trichotillomania. A full-length cognitive-behavioral treatment manual, Treating Trichotillomania (TTM) fills that need. Designing the book for maximum usefulness, authors Franklin and Tolin share their considerable expertise in treating body-focused repetitive behavior disorders (not only hair-pulling but skin-picking and nail-biting as well) in an accessible, clinically valid reference.

Treating Trichotillomania carefully defines TTM, differentiating the disorder from other conditions such as OCD, reviewing the varied clinical forms it can take, and setting out its diagnostic criteria. Treatment chapters are not one-size-fits-all, but offer an evidence-based framework to help practitioners in designing the most appropriate course of treatment across the developmental spectrum, from toddlers to elders. The authors give the reader:

With the increasing recognition of body-focused repetitive behavior disorders and their negative impact upon the lives of sufferers, the clinical psychologist, psychiatrist, social worker, counselor, or school practitioner needs the broadest understanding of the problem, which can be found in this reader-friendly volume.

Martin E. Franklin, Ph.D., Associate Professor of Clinical Psychology in Psychiatry and Clinical Director of the Center for the Treatment and Study of Anxiety at the University of Pennsylvania School of Medicine, received his Ph.D. in clinical psychology from the University of Rhode Island in 1993. Dr. Franklin joined the Center's faculty in 1992 upon completion of his clinical internship at the Medical College of Pennsylvania/Eastern Pennsylvania Psychiatric Institute. His scholarly publications include scientific articles and book chapters on the treatment of adult and pediatric OCD, social phobia, trichotillomania, PTSD, and readiness for behavior change. He was a member of the Expert Consensus Panel for Obsessive Compulsive Disorder that assisted with the development of treatment guidelines for adult and pediatric OCD. Dr. Franklin is a co-investigator and clinical supervisor on the Center's ongoing NIMH-funded randomized controlled trials in pediatric OCD, adult OCD, and social phobia.

David F. Tolin, Ph.D., is the founder and Director of the Anxiety Disorders Center at The Institute of Living. He is also Assistant Professor of Psychiatry at the University of Connecticut School of Medicine. Dr. Tolin received his Ph.D. from the University of Arkansas, and completed a predoctoral internship at Tufts University School of Medicine/VA Medical Center, Boston. Dr. Tolin's research and clinical interests include cognitive-behavioral therapy for anxiety disorders in adults and children, and cognitive processes that underlie anxiety disorders, particularly obsessive-compulsive disorder, posttraumatic stress disorder, and panic disorder. He is the recipient of the award for Distinguished Contribution to the Science of Psychology from the Connecticut Psychological Association, and an Early Career Award from the Anxiety Disorders Special Interest Group of the Association for Advancement of Behavior Therapy. He is a Fellow of the Council for Scientific Medicine and Mental Health.

"Treating Trichotillomania: Cognitive-Behavioral Therapy of Hairpulling and Related Problems focuses primarily on trichotillomania (TTM) … . it is concise, well written, empirically grounded, and richly filled with clinical examples and samples of patient-therapist dialogue that clearly illustrate the various techniques. … In summary, this book is essential reading for all clinicians involved in the treatment of TTM. … Franklin and Tolin have performed a valuable clinical service by clearly showing readers how to implement this intervention along with other cognitive-behavioral interventions for TTM." (Steven Taylor, PsycCRITIQUES, Vol. 53 (11), 2008)

"This book on treating trichotillomania is a powerful addition to a continuing series on anxiety and related disorders. … Psychologists and other mental health professionals will find this valuable for their practice. Graduate students will benefit from the advanced knowledge and overall understanding of trichotillomania. … One major highlight is the emphasis on self-monitoring which is important for all psychiatric disorders. This is one of the best books available on trichotillomania, and clinicians are strongly urged to have this invaluable reference on their selves." (Nicholas Greco IV, Doody’s Review Service, August, 2009)