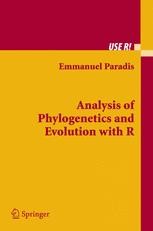 Analysis of Phylogenetics and Evolution with R

The increasing availability of molecular and genetic databases coupled with the growing power of computers gives biologists opportunities to address new issues, such as the patterns of molecular evolution, and re-assess old ones, such as the role of adaptation in species diversification.

This book integrates a wide variety of data analysis methods into a single and flexible interface: the R language. This open source language is available for a wide range of computer systems and has been adopted as a computational environment by many authors of statistical software. Adopting R as a main tool for phylogenetic analyses will ease the workflow in biologists' data analyses, ensure greater scientific repeatability, and enhance the exchange of ideas and methodological developments.

Graduate students and researchers in evolutionary biology can use this book as a reference for data analyses, whereas researchers in bioinformatics interested in evolutionary analyses will learn how to implement these methods in R. The book starts with a presentation of different R packages and gives a short introduction to R for phylogeneticists unfamiliar with this language. The basic phylogenetic topics are covered: manipulation of phylogenetic data, phylogeny estimation, tree drawing, phylogenetic comparative methods, and estimation of ancestral characters. The chapter on tree drawing uses R's powerful graphical environment. A section deals with the analysis of diversification with phylogenies, one of the author's favorite research topics. The last chapter is devoted to the development of phylogenetic methods with R and interfaces with other languages (C and C++). Some exercises conclude these chapters.

Emmanuel Paradis is an evolutionary biologist at the Centre National de la Recherche Scientifique (CNRS) and the Institut de Recherche pour le Développement (IRD) in Montpellier. He received his Doctorate Diploma in population biology and ecology in 1993 at the University of Montpellier II. He has conducted empirical and theoretical research on birds, mammals, and fish. He worked at the British Trust for Ornithology for three years and at the Institut des Sciences de l'Évolution in Montpellier for seven years where he developed most of the ideas presented in this book. He is the main author and maintainer of the R package APE (Analysis of Phylogenetics and Evolution).

"This book is a rich source of information. The general introduction in R makes it easy, also for R beginners, to understand the structure of data in R … . explains all the possibilities the ape package offers, starting from loading data (trees, alignments), handling them, to statistics and the plotting of trees step by step by giving many additional information about the basics in R. … it is a very useful manual giving many examples that facilitate the immediate application of the presented functions." (Natalie Cusimano, www.eeslmu.de, July, 2007)

"‘Analysis of Phylogenetics and Evolution with R’, published in 2006 in Springer, seems very thin at a first glance but very soon proved to be highly useful for me. … information is well chosen and considers (nearly) all the functions necessary to carry out the analyses presented in this book. Readers who are completely new to R will find these … especially usefull. … The book constitutes a well-written documentation and facilitates the use of R as an integrative computational environment for phylogenetics and evolution." (Christoph Heibl, www.eeslmu.de, July, 2007)

"The book by Paradis … is filled with examples and case studies illustrating how to use features of the existing packages. It is the sort of book where you sit in front of your computer and read a bit, tinker a bit, read a bit more, and gradually increase your confidence with the R environment. … I think people will find Analysis of Phylogenetics and Evolution with R to be a very useful reference book. … So … buy the book, and get involved!" (Barbara R. Holland, Systematic Biology, Vol. 56 (4), 2007)

"Paradis succeeds in teaching how one can harness a substantial portion of these analyses through R and ape package. The key to Paradis's success lies in his book's numberous examples and their relevance to real problems phylogenetecists face....This book is ideal for graduate-level course for evolutionary biologists who want to learn how to construct their own statisticsal analyses, as well as statisticians looking for practical experience....I plan to adopt [this book] for a hands-on course on solving real phlogenetics problems." (Marc A Suchard, Biometrics, December 2007)

"Analysis of phylogenetics and Evolution With R is, in effect, a user’s manual for several R packages … . The book explains various statistical analysis of interest to evolutionary biologists in R using these packages. … I can also envision this as an excellent textbook. … can help organize the ideas, and make it easier for students to implement them on data. … This will make the foreign elements of the class (biology for statisticians, statistics for biologists) more concrete and easier to learn." (M. Last, Journal of the American Statistical Association, Vol. 102 (480), 2007)

"This book is a handbook for a program package for doing phylogenetic and evolutionary analysis on the open-source computational statistics platform R. … The intended audience is researchers in evolutionary biology and population genetics, and in bioinformatics, where R has already become a widely used statistical environment. … A good selection of specific computational exercises are provided, based on publicly available data sets." (Daniel M. Burns, Mathematical Reviews, Issue 2008 h)