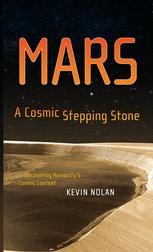 The questions of our origin and cosmic abundance of life are among the most compelling facing humanity. We have determined much about the nature and origin of the Universe and our place in it, but with virtually all evidence of our origin long since gone from our world and an unimaginably vast Universe still to explore, defining answers are difficult to obtain.

For all of the difficulties facing us however, the planet Mars may act as a ‘cosmic stepping stone’ in uncovering some of the answers. Although different today, the origin and early history of both Earth and Mars may have been similar enough to consider an origin to life on both. But because Mars’ planetary processes collapsed over three billion years ago – just as life was beginning to flourish on Earth – a significant and unique record of activity from that era perhaps relevant to the origin of life still resides there today.

In recognition of this, both the US and Europe are currently engaged in one of the most ambitious programs of exploration ever undertaken. Built on our legacy of Mars exploration from the Viking era and before, a far-reaching, phased, program of robotic exploration now and over the coming decades aims at obtaining definitive answers about the origin and nature of the red planet and what it has to say about the origin and cosmic abundance of life. This book examines these issues in one of the most comprehensive treatments ever written about the planet Mars and our legacy of engagement with it, in language suitable for non-expert and expert alike.

Opening chapters consider the question of life in the Universe and the origin of life on Earth and what challenges face us in uncovering defining answers. With a realization of its importance in this, the next section examines the legacy of our engagement with Mars. From Kepler’s work on its orbit, Schiaparelli’s efforts to resolve its surface features and NASA’s Mariner and Viking programs attempting to determine whether life resides upon the surface, Mars has remained elusive, yet always prodding and extending our capabilities in exploration and our perception of our place in the Universe. Subsequent chapters consider our current understanding of the planet and the recently devised comprehensive program for scientific exploration. All recent, current and upcoming missions and the latest findings are discussed in detail, providing our best understanding yet of a vast and ancient landscape indeed characterized by significant activity relevant to our quest and which also points to a planet far from dead today. Late chapters consider NASA and ESA plans for Mars over the next thirty years, increasingly shaped by the scientific successes to date, unprecedented public interest and by issues of planetary protection. And with mounting political interest, our program for Mars may culminate in a human mission to Mars, perhaps sometime around 2040. The greatest discovery, however, remains to be made. If even one microbe is found on Mars, it will reveal a cosmic context for life with Earth as one place among many harboring life, confirming our cosmic origins and destiny.

Kevin Nolan is a scientist and science communicator from Ireland. He holds honors B.Sc. and M.Sc. degrees in physics and astronomy. After several years in the computer industry, Kevin returned to lecture in physics at the Institute of Technology, Tallaght, Dublin, Ireland and is currently pursuing his Ph.D. under Dr. Niall Smith of the Cork Institute of Technology, developing a software based image analysis system for the European Space Agency INTEGRAL space observatory.

In 2001, Kevin was invited by Prof. Ian Elliot of Dunsink Observatory to act as secretary to Ireland's contribution to the ESA/ESO/CERN European youth project, ‘Life in the Universe’. Ireland’s efforts were complimented and supported by Ann Druyan, author, media producer and wife to the late Carl Sagan. In 2002/2003 Kevin was awarded a state grant to present a series of high profile, media-rich lectures to celebrate the 25th anniversary of the Voyager space missions (titled "Voyager - from Earth to Interstellar Space", Nov 2002) and current Mars exploration (titled "Mars - A Cosmic Stepping Stone" May 2003), which lead to Kevin proposing and in part developing a full-page color feature on Mars for The Irish Times newspaper and a feature article for Astronomy&Spaces (A&S) magazine.

Subsequent to further well received articles for Astronomy&Space and the Irish Times, Kevin embarked on a new writing project - a monthly column for A&S titled 'Cosmic Perspectives' – examining human contexts associated with space exploration. According to A&S editor and Astronomy Ireland Chairman Dave Moore FRAS, the column was among the most popular of the magazine, often prompting lively feedback and debate from readers. Kevin hopes to bring the concept to a broader audience through newspaper and magazine. Also under development are several other books (aside from the currently available "Mars – A Cosmic Stepping Stone") and a science documentary proposal also about the planet Mars, all aimed at connecting the public with matters of scientific relevance.

"...Kevin Nolan knows his marbles, as we would say in this part of the world. I was absolutely mesmerized with the amount of relevant and accurate detail that he manages to squeeze into less than 400 pages of lively text, and this well supported by dozens of crisp illustrations... I can wholeheartedly recommend this book for anyone with an interest in the development of life on Earth and on human plans to populate the Universe." (Gerard McMahon, Astronomy & Space, January 2009)

"Whoever steps out onto the surface of Mars is likely to be greeeted and shown around by Kevin Nolan. Kevin, lecturer in physics at Tallaght Institute of Technology, probably knows more about Mars than most of us know about Earth, and it is remarkable just how much we now know about the red planet. For a number of years, Mars has been the target for mission after mission, all of which Kevin describes in some detail..." (Tom Kennedy, Science Spin, February 24, 2009)

"...to date, the search for life elsewhere in the universe has eluded us. Mars: A Cosmic Stepping Stone is an attempt by Irish scientist Kevin Nolan to put our explorations of the Red Planet in the general context of that search. His book could hardly be more timely as Nasa scientists have recently found plumes of methane gas which could originate from microbial life on Mars... No place in our solar system, not even our own moon, is as well known to us as Mars, yet we have literally and metaphorically only scratched the surface. Nolan, a lecturer in physics at Tallaght IT, diligently sets out the history of Mars exploration and how the planet has confounded, confused and surprised in equal measure... There have been many books written about Mars, but few are as comprehensive or as lucid as this... Mars could be the scientific story of this century, but the public have not yet become fully engaged... The subtitle of the book is Why Mars Matters. It is to the author’s ultimate credit that he has answered that question so thoroughly." (Ronan McGreevy, Irish Times, January 29, 2009)

"The book contains discussions of the origin of life on Earth, an overview of historical and current missions, and details and important considerations for future missions to Mars and beyond. This work is aimed at the popular science audience … . the text is well researched, and readers who have the patience to wade through Nolan’s encyclopedic-style prose will find a wealth of facts about our exploration of Mars." (S. A. Russell Gonzalez, Choice, Vol. 46 (7), March, 2009)

"“Kevin Nolan offers a detailed – bordering on academic – and thoroughly up-to-date treatment of the Red Planet in this book..." (Five out of five stars, David Darling, Sky at Night, February, 2009)

"Mars, A Cosmic Stepping Stone is a thoughtful essay into our relationship with the cosmos, and how the conquest of the Red Planet would effectively mark humankind’s rite of passage to the far greater spaces beyond our Solar System. … The book is beautifully produced with a very generous section of colour plates, with many black-and-white illustrations throughout the text. Highly recommended." (Richard McKim, The Observatory, Vol. 129 (1210), June, 2009)