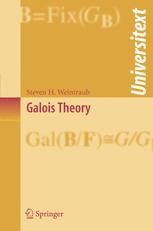 Classical Galois theory is a subject generally acknowledged to be one of the most central and beautiful areas in pure mathematics. This text develops the subject systematically and from the beginning, requiring of the reader only basic facts about polynomials and a good knowledge of linear algebra.

Key topics and features of this book:

- Develops the basic concepts and theorems of Galois theory, including algebraic, normal, separable, and Galois extensions, and the Fundamental Theorem of Galois Theory

- Presents a number of applications of Galois theory, including symmetric functions, finite fields, cyclotomic fields, algebraic number fields, solvability of equations by radicals, and the impossibility of solution of the three geometric problems of Greek antiquity

- Excellent motivaton and examples throughout

The book discusses Galois theory in considerable generality, treating fields of characteristic zero and of positive characteristic with consideration of both separable and inseparable extensions, but with a particular emphasis on algebraic extensions of the field of rational numbers. While most of the book is concerned with finite extensions, it concludes with a discussion of the algebraic closure and of infinite Galois extensions.

Steven H. Weintraub is Professor and Chair of the Department of Mathematics at Lehigh University. This book, his fifth, grew out of a graduate course he taught at Lehigh. His other books include Algebra: An Approach via Module Theory (with W. A. Adkins).

"The text offers the standard material of classical field theory and Galois theory, though in a remarkably original, unconventional and comprehensive manner … . the book under review must be seen as a highly welcome and valuable complement to existing textbook literature … . It comes with its own features and advantages … it surely is a perfect introduction to this evergreen subject. The numerous explaining remarks, hints, examples and applications are particularly commendable … just as the outstanding clarity and fullness of the text." (Werner Kleinert, Zentralblatt MATH, Vol. 1089 (15), 2006)

“This book develops the subject ‘Classical Galois Theory’ systematically from the beginning requiring from the reader only basic knowledge of Linear Algebra. It presents the basic concepts and theorems including algebraic, normal, separable, and Galois extensions. … Providing motivation and numerous examples throughout, the text can be recommended to second year students of mathematics … .” (H. Mitsch, Monatshefte für Mathematik, Vol. 152 (1), September, 2007)