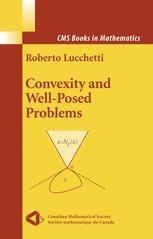 Intended for graduate students especially in mathematics, physics, and

economics, this book deals with the study of convex functions and of

perturbations. The primary goal is the study of the problems of

stability and well-posedness, in the convex case. Stability means the

change the initial data. Well-posedness means that points with values

close to the value of the problem must be close to actual solutions.

In studying this, one is naturally led to consider perturbations of

both functions and of sets.

The book includes a discussion of numerous topics, including:

* hypertopologies, ie, topologies on the closed subsets of a metric space;

* the Hahn-Banach theorem, which is a fundamental tool for the study of convex functions;

* questions related to convergence of sets of nets;

* algorithms for minimizing a convex function.

In order to facilitate use as a textbook, the author has included a

selection of examples and exercises, varying in degree of difficulty.

Robert Lucchetti is Professor of Mathematics at Politecnico di Milano. He has taught this material to graduate students at his own university, as well as the Catholic University of Brescia, and the University of Pavia.

"In this book the author focuses on the study of convex functions and their properties under perturbations of data. In particular, he illustrates the ideas of stability and well-posedness and the connections between them. … This book is intended for graduate students and researchers especially in mathematics, physics and economics; to facilitate its use as a textbook, the author has included many exercises and examples of different levels of difficulty." (Davide La Torre, Mathematical Reviews, Issue 2006 h)

"This book studies convex functions in Banach spaces and the stable behavior under perturbations of the optimization problems associated to them. … An interesting feature of the book is the inclusion of some topics, like elements of game theory, hypertopologies and genericity of well-posedness, not usually found in textbooks devoted to convexity and optimization. … several useful examples, comments and remarks scattered throughout, and over 120 exercises of varying level difficulty. This book is suitable for graduate courses on convex optimization from a mathematical standpoint." (Tullio Zolezzi, Zentralblatt MATH, Vol. 1106 (8), 2007)