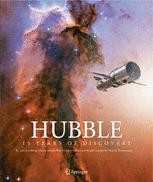 This book forms part of the European Space Agency’s 15th anniversary celebration activities for the 1990 launch of the NASA/ESA Hubble Space Telescope. As an observatory in space, Hubble is one of the most successful scientific projects of all time, both in terms of scientific output and its immediate public appeal.

Hubble creates an enormous impact by exploiting a unique scientific niche where no other instruments can compete. It consistently delivers super-sharp images and clean, uncontaminated spectra over the entire near-infrared and ultraviolet regions of the electromagnetic spectrum. This has opened up new scientific territory and resulted in many paradigm-breaking discoveries.

Exquisite quality images have enabled astronomers to gain entirely new insights into the workings of a huge range of different astronomical objects. Hubble has provided the visual overview of the underlying astrophysical processes taking place in these objects, ranging from planets in our Solar System to galaxies in the young Universe.

Astronomy is fortunate in that telescopes not only produce results of great scientific value, but also of eye-catching beauty and artistic potential. This book shows the close relationship between the two at its best. Hubble’s design remains unique amongst space-based observatories by enabling astronauts to regularly maintain and upgrade it during Space Shuttle Servicing Missions. These have not only kept the telescope at the forefront of scientific capability, but have transformed its performance to heights beyond the dreams of its original designers.

Lars is a science communication specialist heading the Hubble European Space Agency Information Centre group in Munich, Germany where he is responsible for public outreach and education for the NASA/ESA Hubble Space Telescope in Europe.

Lars obtained his Master’s Degree in physics and astronomy from the University of Copenhagen, Denmark. Before assuming his current position, he spent a decade working as a science communicator and technical specialist for Tycho Brahe Planetarium in Copenhagen.

Lars has more than 100 publications to his credit, most of them in popular science communication and its theory. His other productive interests lie in the areas of graphical communication, written communication, technical communication and scientific communication. He is the author of "The Hands-On Guide to Science Communication" (Springer) as well as the co-author of a colourful book on light phenomena in nature. He has produced material for a multitude of different media from star shows, laser shows and slide shows, to web, print, TV and radio. His methodology is focussed on devising and implementing innovative strategies for the production of efficient science communication and educational material. This work involves working with highly skilled graphics people and technicians, some results of which are visible at:www.spacetelescope.org.

Lars is a founding member and secretary of the International Astronomical Union Working Group on "Communicating Astronomy with the Public" (www.communicatingastronomy.org), manager of the world-renowned "ESA/ESO/NASA Photoshop FITS Liberator" project, Outreach & Education Coordinator for the "Astrophysical Virtual Observatory" and is the Executive producer and director of the science documentary movie "Hubble – 15 Years of Discovery".

Bob works for the European Space Agency as part of ESA's collaboration with NASA on the Hubble project. This work is based on the premises of the European Southern Observatory (ESO) near Munich in Germany. He started doing this in 1985, more than 5 years before launch and so has been involved in this huge project for quite a while. During the latter part of this period, Bob served on NASA's Ad Hoc ScienceWorking Group and ESA's Study Science Team as they developed the instrument concepts for the James Webb Space Telescope, the next generation of space observatory.

Martin got his degree in graphics design in Munich in 1989. In those days, computers were not yet the favourite tools of graphic designers and, through the nineties, Martin actively pioneered the exploration of the fascinating and newly emerging world of computer graphics.

In 1990 Martin Kornmesser was the co-founder of the company ART-M, where he created illustrations, wall-paintings and all kinds of graphics design before joining ESA's Hubble Space Telescope outreach group in 1999.

"This is the story of a journey through space and time revealed by a telescope called Hubble. … published as part of the European Space Agency’s 15th anniversary celebration, presents the exquisite color images for which the telescope has become famous. … Hubble has pushed the limit of our knowledge far beyond anything possible before its launch. … Super-sharp images, such as those found here, have enabled astronomers to gain entirely new insights into the workings of a huge range of different astronomical objects." (EurekAlert, July, 2006)