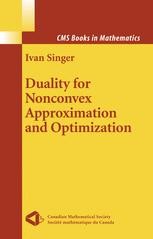 Duality for Nonconvex Approximation and Optimization

In this monograph the author presents the theory of duality for

* duality for worst approximation (i.e., the maximization of the

distance of an element to a convex set)

* duality for reverse convex best approximation (i.e., the minimization of

function on a convex set)

convex function on the complement of a convex set)

Detailed proofs of results are given, along with varied illustrations.

While many of the results have been published in mathematical journals,

this is the first time these results appear in book form. In

addition, unpublished results and new proofs are provided. This

Mathematics in Bucharest, and a Member of the Romanian Academy. He is

one of the pioneers of approximation theory in normed linear spaces, and

of generalizations of approximation theory to optimization theory. He

has been a Visiting Professor at several universities in the U.S.A.,

Great Britain, Germany, Holland, Italy, and other countries, and was the

University. He is one of the editors of the journals Numerical

Functional Analysis and Optimization (since its inception in 1979),

The Theory of Best Approximation and Functional Analysis (SIAM 1974), Bases

"Being the first monograph devoted to nonconvex duality, this book is going to become a fundamental source for researchers in the field. An important feature of the book is that it is also accessible to nonspecialists, since, in spite of dealing with a rather specialized topic, it is essentially self-contained. … this monograph is a very useful addition to the existing literature on optimization and approximation and is undoubtedly going to constitute a major reference on nonconvex duality." (Juan-Enrique Martinez-Legaz, Mathematical Reviews, Issue 2006 k)

"This monograph, being the first book of this kind in the literature, covers a wide range of optimization and approximation problems. It provides an excellent overview over the literature and, moreover, it contains a lot of new results and new proofs of known results. The results and the choice of the classes of problems are well motivated. … The monograph is appropriate for graduate students and advanced readers." (Andreas Löhne, Mathematical Methods of Operations Research, Vol. 66, 2007)

"In this monograph the author presents some approaches to duality in nonconvex approximation in normed linear spaces and to duality in nonconvex global optimization in locally convex spaces. … It is my belief that the monograph under review will become a fundamental reference on nonconvex duality for researchers in the field, and, although the topics are very specialized, the monograph is also accessible to nonspecialists … . is strongly recommended to researchers, postgraduate and graduate students interested in nonconvex duality theory." (Fabián Flores Bazán, Zentralblatt MATH, Vol. 1119 (21), 2007)

"This is a nice addition to the literature on nonconvex optimization in locally convex spaces, devoted primarily to nonconvex duality. Most of the material appears for the first time in book form and examples are abundant. … The style is friendly. I strongly recommend this book to graduate students studying nonconvex optimization theory." (Constantin P. Niculescu, Revue Roumaine de Mathématique Pures et Appliquées, Vol. LII (5), 2007)