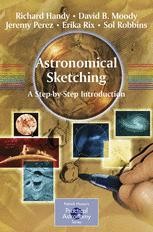 At some time we have all gazed through the telescope eyepiece at the magnificent rings and banded globe of Saturn, or seen long shadows reaching across crater floors at the Moon’s terminator – and wondered at the sheer beauty of the sight.

It seems almost anachronistic to think of sketching when CCD imaging is available, but astronomical sketching provides an entirely different and deeply personal experience. It means spending time at the eyepiece to really look at what you can see, training your eye to perceive ever greater detail to take the fullest advantage of your telescope's light grasp and resolution.

And of course, good astronomical sketches are artwork in themselves, for display and decoration in the home or observatory.

Astronomical Sketching is as an easy, step-by-step introduction to sketching celestial objects. It brings together five talented astronomical sketch artists, each of whom has a unique mastery of the media along with the ability to teach their own techniques.

Here is a wealth of knowledge, tips and techniques for every aspiring astronomical artist!

Richard Handy, principally noted for his lunar sketchwork, studied Art and Astrophysics at the University of California Santa Cruz. He currently runs a small Internet based astronomy company and spends his cloudless evenings sketching the Moon and other celestial objects from his home in San Diego, California. Rich very actively supports observational sketching and is a
regular, enthusiastic contributor and supporter of a number of online astronomy forums.

David Moody has been observing the skies since age 11. During that time, he also somehow managed to become a CPA, teach at a university for a few years, and work as a magazine editor for several years. He has given several lectures and talks on subjects ranging from emerging stars to emerging business technologies. He is s past member of the Pontchartrain Astronomical Society and a current member of the Texas Astronomical Society and can be found every year at the Texas Star Party trying to observe galaxies with averted imagination.

Jeremy Perez has worked as a graphic artist since 1990. He maintains a web site that focuses on astronomical sketching as a means of recording visual observations and has had some of his sketches published in Sky and Telescope Magazine. He is a member of the Astronomical League, and currently serves as vice president of the Coconino Astronomical Society.

Erika Rix resides in Zanesville, Ohio where she owns a small business. She is a member of the Columbus Astronomical Society and volunteers her time as a moderator for the Cloudy Nights Telescope Reviews forum. Despite having only been active as an amateur astronomer for a little over a couple of years, her lunar and solar studies progressed quickly through observational sketching and her work has been published on various Internet sites.

Sol Robbins has been a professional gallery artist and magazine illustrator since the late 1970's. He has been an avid observer for over 40 years. His sketches of the planets have appeared in magazines, books and used in scientific research publications.

"Sketching is the best way to train the eye for visual observation and it enhances an observer’s enjoyment of the night sky. This book is aimed at those who would like to discover and develop sketching techniques. The five experienced authors describe their areas of specialty, with chapters on sketching the Moon, comets, the Sun, planets, star clusters, nebulae and galaxies. … In all, it’s a super book." (Peter Grego, BBC Sky at Night, December, 2007)