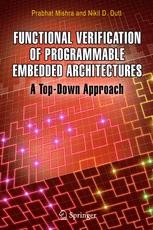 Validation of programmable architectures, consisting of processor cores, coprocessors, and memory subsystems, is one of the major bottlenecks in current System-on-Chip design methodology. A critical challenge in validation of such systems is the lack of a golden reference model. As a result, many existing validation techniques employ a bottom-up approach to design verification, where the functionality of an existing architecture is, in essence, reverse-engineered from its implementation. Traditional validation techniques employ different reference models depending on the abstraction level and verification task, resulting in potential inconsistencies between multiple reference models.

This book presents a top-down validation methodology that complements the existing bottom-up approaches. It leverages the system architect’s knowledge about the behavior of the design through architecture specification using an Architecture Description Language (ADL). The authors also address two fundamental challenges in functional verification: lack of a golden reference model, and lack of a comprehensive functional coverage metric.