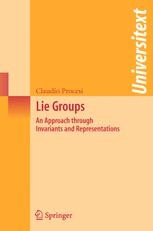 An Approach through Invariants and Representations

Lie groups has been an increasing area of focus and rich research since the middle of the 20th century. Procesi's masterful approach to Lie groups through invariants and representations gives the reader a comprehensive treatment of the classical groups along with an extensive introduction to a wide range of topics associated with Lie groups: symmetric functions, theory of algebraic forms, Lie algebras, tensor algebra and symmetry, semisimple Lie algebras, algebraic groups, group representations, invariants, Hilbert theory, and binary forms with fields ranging from pure algebra to functional analysis.

Key to this unique exposition is the large amount of background material presented so the book is accessible to a reader with relatively modest mathematical background. Historical information, examples, exercises are all woven into the text.

Lie Groups: An Approach through Invariants and Representations will engage a broad audience, including advanced undergraduates, graduates, mathematicians in a variety of areas from pure algebra to functional analysis and mathematical physics.

"Lie Groups … is a spectacular book. … is a pleasure to read, and the topics covered are perfectly chosen. … preliminary remarks set the stage perfectly for what follows, smoothing out what might otherwise have been rougher patches (certainly to the neophyte). And the whole book is written in this way, making for remarkable accessibility. Given that it is published in Springer’s Universitext series ... Lie Groups: An Approach through Invariants and Representations is probably the best book I’ve ever seen for this purpose." (Michael Berg, MAA Online, May, 2007)

"The author draws on his long involvement with ‘modern’ invariant theory to provide an extensive account of the subject, thoroughly integrated with Lie theory. … Procesi’s book will be a valuable resource for anyone coming into contact with invariant theory and its connections with representation theory. Nowhere else is so much of the essential material brought together under one roof." (James E. Humphreys, Mathematical Reviews, Issue 2007 j)

"Procesi's book touches on almost all topics ... with a great deal of emphasis on invariant theory. ... the author has attempted to paint a huge canvas and has succeeded in doing it. ... the book gives a wealth of information about invariant theory, both classical and modern, which is difficult to get from other sources. I recommend it strongly for any reader who wants to learn, in depth, about Lie groups, their representations and invariants." (V. S. Varadarajan, Bulletin of the American Mathematical Society, Vol. 45 (4), October, 2008)

"Lie theory … is one of the central areas in mathematics and mathematical physics. … The chapters … can be taken as the subject of an entire, largely independent graduate course. … All in all, this unique textbook, combing invariant theory and Lie theory in a very natural way, refers to virtually every (classical and modern) aspect of this deep interrelation … . The author’s effort at providing such a rich source of insight must be seen as being highly welcome, rewarding, valuable … ." (Werner Kleinert, Zentralblatt MATH, Vol. 1154, 2009)