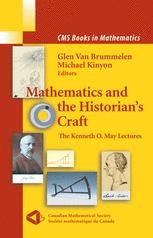 Mathematics and the Historian's Craft

The Kenneth O. May Lectures

Kenneth Ownsworth May (1915-1977) was a brilliant and influential mathematician, historian, and educator who founded the journal Historia Mathematica as well as the Canadian Society for the History and Philosophy of Mathematics. He viewed the practice of the history of mathematics as a unique melding of the crafts of mathematician and historian. This entails sensitivity to the mathematical content of the subject and to the various contexts in which it can be understood. Mathematical practitioners, for pedagogical reasons or to contextualize their own work, tend to focus on finding the antecedents for current mathematical theories in a search for how particular subdisciplines and results came to be as they are today. On the other hand, historians of mathematics bypass the current state of affairs, and are more interested in questions that bear on the changing nature of the discipline itself. The papers contained in this volume exhibit 12 outstanding examples of historians approaching their craft in distinct ways, yet consistent with Kenneth May's vision. Each paper is based on a keynote address, known as the Kenneth O. May Lecture, delivered at the annual meeting of the Canadian Society for the History and Philosophy of Mathematics.

This volume includes the following contributions:

* Ivor Grattan-Guinness, History or Heritage? An Important Distinction in

of MacLaurin's Treatise of Fluxions

* Thomas Archibald and Louis Charbonneau, Mathematics in Canada before 1945: A

* Karen Parshall, The Emergence of the American Mathematical Research Community

* Stuart Shanker, Turing and the Origins of AI

"The full set of Kenneth O. May Lectures given at the Annual meetings of the Canadian Society for History and Philosophy of Mathematics since 1988, are presented in this volume as a tribute to Kenneth May … . The essays, varying greatly in nature as well as scope, concern themes of interest to the Society … . this book contains a lot of interesting material besides: there is something for just about every one, not just specialists in the History of Mathematics. Recommended!" (Michael Berg, MathDL – Online, April, 2006)

"This collection of papers contains extended versions of selected lectures delivered at the annual meeting of the Canadian Society for the History and Philosophy of Mathematics … . The papers are written not only for historians of mathematics but also, in particular, for others who are interested in the nature and beauty of mathematics. … The book will be very helpful for historians and philosophers of mathematics, for teachers at universities and secondary schools, and students as well as researchers in mathematics and history." (EMS Newsletter, June, 2006)

"The essays collected in this volume are based on keynote lectures given at annual meetings of the Canadian Society for History and Philosophy of Mathematics (CSHPM/SCHPM). … most of the material is accessible to a wide mathematical audience and the engaging quality of the writing makes for excellent reading. The book would make a welcome addition to any academic library and could certainly be used as a resource for undergraduate research projects." (Robert E. Bradley, Historia Mathematica, Vol. 34, 2007)