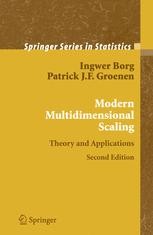 The book provides a comprehensive treatment of multidimensional scaling (MDS), a family of statistical techniques for analyzing the structure of (dis)similarity data. Such data are widespread, including, for example, intercorrelations of survey items, direct ratings on the similarity on choice objects, or trade indices for a set of countries. MDS represents the data as distances among points in a geometric space of low dimensionality. This map can help to see patterns in the data that are not obvious from the data matrices. MDS is also used as a psychological model for judgments of similarity and preference.

This book may be used as an introduction to MDS for students in psychology, sociology, and marketing. The prerequisite is an elementary background in statistics. The book is also well suited for a variety of advanced courses on MDS topics. All the mathematics required for more advanced topics is developed systematically.

This second edition is not only a complete overhaul of its predecessor, but also adds some 140 pages of new material. Many chapters are revised or have sections reflecting new insights and developments in MDS. There are two new chapters, one on asymmetric models and the other on unfolding. There are also numerous exercises that help the reader to practice what he or she has learned, and to delve deeper into the models and its intricacies. These exercises make it easier to use this edition in a course. All data sets used in the book can be downloaded from the web. The appendix on computer programs has also been updated and enlarged to reflect the state of the art.

Ingwer Borg is Scientific Director at the Center for Survey Methodology (ZUMA) in Mannheim, Germany, and Professor of Psychology at the University of Giessen, Germany. He has authored or edited 14 books and numerous articles on data analysis, survey research, theory construction, and various substantive topics of psychology. He also served as president of several professional organizations.

Patrick Groenen is Professor in Statistics at the Econometric Institute of the Erasmus University Rotterdam, the Netherlands. Before, he was assistant professor at the Department of Data Theory at Leiden University in the Netherlands. He is an associate editor for three international journals. He has published on MDS, unfolding, optimization, multivariate analysis, and data analysis in various top journals.

"[Modern Multidimensional Scaling: Theory and Applications] is without a doubt the most comprehensive and most rigorous book on MDS...The second edition is considerably (140 pages) longer than the first, mostly because of much more material on MDS of rectangluar matrices (also known as unfolding) and MDS of asymmetric matrices is included...this is currently by far the best available book on MDS, and it is quite likely to stay in that position for a long time." Journal of Statistical Software, August 2005

"This is an updated and expanded version of the first edition … . the exercises at the end of each chapter are an attractive feature. I can recommend the book enthusiastically." (W.J. Krzanowski, Short Book Reviews, Vol. 26 (1), 2006)

"The authors provide a comprehensive treatment of multidimensional scaling (MDS), a family of statistical techniques for analyzing similarity or dissimilarity data on a set of objects. … This book may be used as an introduction to MDS for students in psychology, sociology and marketing … . It is also well suited for a variety of advanced courses on MDS topics." (Ivan Krivý, Zentralblatt MATH, Vol. 1085, 2006)