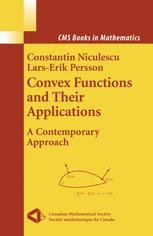 Convex Functions and their Applications

Convex functions play an important role in many branches of mathematics, as well as other areas of science and engineering. The present text is aimed to a thorough introduction to contemporary convex function theory, which entails a powerful and elegant interaction between analysis and geometry.  A large variety of subjects are covered, from one real variable case (with all its mathematical gems) to some of the most advanced topics such as the convex calculus, Alexandrov’s Hessian, the variational approach of partial differential equations, the Prékopa-Leindler type inequalities and Choquet's theory.

This book can be used for a one-semester graduate course on Convex Functions and Applications, and also as a valuable reference and source of inspiration for researchers working with convexity.  The only prerequisites are a background in advanced calculus and linear algebra.  Each section ends with exercises, while each chapter ends with comments covering supplementary material and historical information.  Many results are new, and the whole book reflects the authors’ own experience, both in teaching and research.

Constantin P. Niculescu is a Professor in the Department of Mathematics at the University of Craiova, Romania. Dr. Niculescu directs the Centre for Nonlinear Analysis and Its Applications and also the graduate program in Applied Mathematics at Craiova. He received his doctorate from the University of Bucharest in 1974. He published in Banach Space Theory, Convexity Inequalities and Dynamical Systems, and has received several prizes both for research and exposition.

Lars Erik Persson is Professor of Mathematics at Luleå University of Technology and Uppsala University, Sweden. He is the director of Center of Applied Mathematics at Luleå, a member of the Swedish National Committee of Mathematics at the Royal Academy of Sciences, and served as President of the Swedish Mathematical Society (1996-1998). He received his doctorate from Umeå University in 1974. Dr. Persson has published on interpolation of operators, Fourier analysis, function theory, inequalities and homogenization theory. He has received several prizes both for research and teaching.

"This monograph is aimed to serve as an elementary graduate textbook on convex functions. … Four appendices complete this book. … A list of exercises is provided at the end of each section. Every chapter is closed by a section with valuable historical remarks and comments on further developments." (Giovanni Alberti, Mathematical Reviews, Issue 2006 m)

"The book is devoted to elementary theory of convex functions. … The book will be useful to all who are interested in convex functions and their applications." (Peter Zabreiko, Zentralblatt MATH, Vol. 1100 (2), 2007)

"This is a nice little book, providing a new look at the old subject of convexity and treating it from different points of view. As the authors suggest, parts of it can be used for a course on convexity for first year graduate students. … The book well documents sources of ideas and the origins of results and will be of interest even for specialists in the field; it may also be used as a reference book on the subject." (EMS Newsletter, September, 2006)

"The book could be of interest to those applied mathematicians who feel that such material could be useful to them. … is intended to be a classroom text, in which each chapter is followed by an extensive ‘Comments’ section containing some background as well as some additional results. … it is more suited as a scholarly introduction to convex functions and their many uses. It very much lives up to its subtitle, A Contemporary Approach." (Robert Phelps, SIAM Review, Vol. 49 (1), 2007)