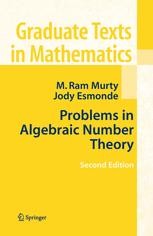 From Reviews of the First Edition:

This book provides a problem-oriented first course in algebraic number theory. ... The authors have done a fine job in collecting and arranging the problems. Working through them, with or without help from a teacher, will surely be a most efficient way of learning the theory. Many of the problems are fairly standard, but there are also problems of a more original type. This makes the book a useful supplementary text for anyone studying or teaching the subject. ... This book deserves many readers and users.

The book covers topics ranging from elementary number theory (such as the unique factorization of integers or Fermat's little theorem) to Dirichlet's theorem about primes in arithmetic progressions and his class number formula for quadratic fields, and it treats standard material such as Dedekind domains, integral bases, the decomposition of primes not dividing the index, the class group, the Minkowski bound and Dirichlet's unit theorem ... the reviewer is certain that many students will benefit from this pathway into the fascinating realm of algebraic number theory.

This second edition is an expanded and revised version of the first edition. In particular, it contains an extra chapter on density theorems and $L$-functions highlighting some of the analytic aspects of algebraic number theory.

"Problems in Algebraic Number Theory is intended to be used by the students for independent study of the subject. It provides the reader with a large collection of problems (about 500) … . The reviewer thinks that the authors have done a fantastic job choosing the problems, which are perfectly arranged so the students can progressively move from topic to topic … . the book is an excellent resource for the instructor and the student as a companion to any algebraic number theory course." (Álvaro Lozano-Robledo, MathDL, May, 2005)

"This second edition is an expanded and revised version of the first edition. In particular, it contains an extra chapter on density theorems and L-Functions highlighting some of the analytic aspects of algebraic number theory. … the reviewer is certain that many students will benefit from this pathway into the fascinating realm of algebraic number theory." (Zentralblatt für Didaktik der Mathematik, August, 2005)

"This is the second edition of Problems in algebraic number theory. ... errors have been corrected … . The decision to expand the book by including a chapter on density theorems is most welcome." (Franz Lemmermeyer, Zentralblatt MATH, Vol. 1055)

"This is the second edition of an unusual introduction to algebraic number theory. … each chapter is written in straightforward textbook style. All chapters contain a very large number of problems. … it presents a good way of acquiring a working knowledge of basic algebraic number theory by using it for independent study or as supplementary reading." (Ch. Baxa, Monatshefte für Mathematik, Vol. 149 (4), 2006)