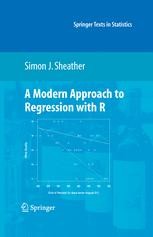 A Modern Approach to Regression with R

A Modern Approach to Regression with R focuses on tools and techniques for building regression models using real-world data and assessing their validity. A key theme throughout the book is that it makes sense to base inferences or conclusions only on valid models.

The regression output and plots that appear throughout the book have been generated using R. On the book website you will find the R code used in each example in the text. You will also find SAS-code and STATA-code to produce the equivalent output on the book website. Primers containing expanded explanations of R, SAS and STATA and their use in this book are also available on the book website.

The book contains a number of new real data sets from applications ranging from rating restaurants, rating wines, predicting newspaper circulation and magazine revenue, comparing the performance of NFL kickers, and comparing finalists in the Miss America pageant across states.

One of the aspects of the book that sets it apart from many other regression books is that complete details are provided for each example. The book is aimed at first year graduate students in statistics and could also be used for a senior undergraduate class.

Simon Sheather is Professor and Head of the Department of Statistics at Texas A&M University. Professor Sheather’s research interests are in the fields of flexible regression methods and nonparametric and robust statistics. He is a Fellow of the American Statistical Association and listed on ISIHighlyCited.com.

“This book fills an important niche in the regression textbook by providing a data-centered approach strong on graphics. …I am particularly interested in teaching regression to undergraduates, and I used this book one term in an introduction to applied regression course. …It is a book I will use again. …Graduate students in particular will find the balance between applications and theory useful, and the minimal amount of formulae used means the book should be useful for students from a variety of disciplines. The well-motivated homework problems are interesting and sufficiently complex that students at all levels will be able to learn something from them.” (Journal of Statistical Software, March 2010, Vo. 33, Book Review 3)

“The author states that this book focuses on tools and techniques for building regression models using real-world data and assessing their validity. A key theme throughout the book is that it makes sense to base inferences or conclusions only on valid models. The primary focus is on examining statistical and graphical methods for assessing whether or not the model upon which one desires to draw inferences is valid. … the examples…will have appeal to the students due to the variety of the techniques motivated by the datasets. The author has included numerous graphs and descriptions with associated flow charts to assist the student in ’visualizing’ the process one should take when modeling data using regression models. I found that the book was …very readable and that the graphics were …useful in the analysis of the problem under consideration. The book is also the ’right size’ with enough but not too much content. Personally, I was pleased not to see the voluminous R code that ’litters’ many of the books that are ‘with R.’ I was also pleased that some of the characteristic R output has been minimized and reformatted to improve the appearance of the text. …One of the aspects I found most appealing is that which is not found in the book. The supplementary material given on the author’s webpage is potentially very useful. The R code that was used to create the graphs and output in the book is provided in a separate document. This supplement will be very useful to the student who is learning R. In addition, there are similar documents that use SAS and STATA. I have found that having code to address a specific statistical problem is a very effective way for a student to learn a statistical software package. The author’s supplementary material using all three packages will provide an effective means for a student to learn multiple software packages without having to spend valuable classroom time and instructor supervision.” (The American Statistician, August 2010, Vol. 64, No. 3)