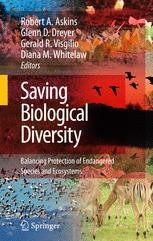 The distinctive contribution of this book is that it presents a pragmatic approach for preserving biological diversity. Experts in a wide variety of fields, including philosophy, environmental policy, law, economics and biology, present different perspectives on how to prevent widespread extinction around the world. Several chapters deal with basic questions such as how we should define biodiversity and how we should determine what is most important to save. Two chapters focus on how we can place an economic value on biological diversity, a step that is often critical for gaining acceptance for conservation efforts. One of the major conclusions is that people are often willing to pay to preserve natural systems that have no immediate value in terms of generating income or commodities. Other chapters are case studies of efforts to protect particular species or ecosystems; these provide practical guidelines for how to protect biodiversity more effectively.

The book is divided into three sections: we start with discussions of efforts to protect endangered species; move to approaches for protecting intact, functioning natural ecosystems; and finish with proposals to protect the global natural system (the biosphere). It becomes clear as one progresses through these sections that these three approaches do not constitute distinctly different, much less competing, strategies for protecting biological diversity. Instead they are interdependent. Efforts to protect a particular endangered species typically lead to efforts to protect its ecosystem. Similarly, efforts to protect an ecosystem lead naturally to concerns about the atmosphere, climate and water supplies. The interdependence may also work in the other direction: loss of species potentially can undermine the stability and resilience of ecosystems, which can have a large negative impact on the biosphere. The main conclusion is that a wide range of approaches to conservation is needed to maintain diverse and ecologically functioning natural systems.

Robert Askins is Professor of Biology at Connecticut College, where he teaches courses in ecology, environmental studies, animal behavior, and ornithology. His research focuses on the ecology and conservation of migratory birds in both their northern breeding areas and tropical wintering areas. He has analyzed the habitat requirements of forest birds that nest in deciduous forests in New England and Japan, and the ecology of songbirds that spend the winter in the U.S. Virgin Islands. He also has studied species that are restricted to early successional forest habitats. He has published scientific papers in numerous journals including Science, Proceedings of the National Academy of Sciences, Wetlands, Ecology, Current Ornithology, Studies in Avian Biology, Wilson Bulletin, and Conservation Biology. In 2000 he published "Restoring North America’s Birds; Lessons from Landscape Ecology," a book on the ecology and conservation of North American birds. Currently he is chair of the Biology Department at Connecticut College and Karla Heurich Harrison Director of the Goodwin-Niering Center for Conservation Biology and Environmental Studies.

Glenn D. Dreyer is the Charles & Sarah P. Becker ‘27 Director of the Connecticut College Arboretum and an Adjunct Associate Professor of Botany at Connecticut College. His career has focused primarily on the interface between horticulture and ecology from both academic and management perspectives. The Connecticut College Arboretum has historically operated as both public garden featuring native plants and as an ecological field site for research and teaching. Dreyer’s research has focused mainly on the ecology and control of invasives, vegetation management, and documenting big and historic trees. He also serves as Executive Director of the Goodwin-Niering Center.

Gerald R. Visgilio is Professor of Economics at Connecticut College, where he has spent nearly three decades working in the area of environmental and natural resource economics. He teaches courses in microeconomics, environmental and natural resource economics, law and economics, and antitrust economics and policy. His current research focuses on an economic evaluation of emission control policies. He has co-edited three books: Our Backyard A Quest for Environmental Justice, which was listed by Choice among its Outstanding Academic Titles in 2003, America’s Changing Coasts Private Rights and Public Trust, which was included in Edward Elgar’s Advances in Ecological Economics series in 2005, and Acid in the Environment Lessons Learned and Future Prospects, which was recently published in 2007. He also is on the faculty of the Goodwin-Niering Center.

Diana M. Whitelaw is Associate Director of the Goodwin-Niering Center for Conservation Biology and Environmental Studies at Connecticut College where she coordinates the Certificate Program in Environmental Studies. Whitelaw co-edited Our Backyard: A Quest for Environmental Justice, which was selected by Choice as an Outstanding Academic Title in Science and Technology in 2003, America’s Changing Coasts: Private Rights and Public Trust in 2005 and Acid in the Environment: Lessons Learned and Future Prospects in 2007.