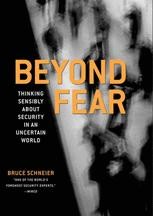 Thinking Sensibly About Security in an Uncertain World

Many of us, especially since 9/11, have become personally concerned about issues of security, and this is no surprise. Security is near the top of government and corporate agendas around the globe. Security-related stories appear on the front page everyday. How well though, do any of us truly understand what achieving real security involves?

In Beyond Fear, Bruce Schneier invites us to take a critical look at not just the threats to our security, but the ways in which we're encouraged to think about security by law enforcement agencies, businesses of all shapes and sizes, and our national governments and militaries. Schneier believes we all can and should be better security consumers, and that the trade-offs we make in the name of security - in terms of cash outlays, taxes, inconvenience, and diminished freedoms - should be part of an ongoing negotiation in our personal, professional, and civic lives, and the subject of an open and informed national discussion.

With a well-deserved reputation for original and sometimes iconoclastic thought, Schneier has a lot to say that is provocative, counter-intuitive, and just plain good sense. He explains in detail, for example, why we need to design security systems that don't just work well, but fail well, and why secrecy on the part of government often undermines security. He also believes, for instance, that national ID cards are an exceptionally bad idea: technically unsound, and even destructive of security. And, contrary to a lot of current nay-sayers, he thinks online shopping is fundamentally safe, and that many of the new airline security measure (though by no means all) are actually quite effective. A skeptic of much that's promised by highly touted technologies like biometrics, Schneier is also a refreshingly positive, problem-solving force in the often self-dramatizing and fear-mongering world of security pundits.

Schneier helps the reader to understand the issues at stake, and how to best come to one's own conclusions, including the vast infrastructure we already have in place, and the vaster systems--some useful, others useless or worse--that we're being asked to submit to and pay for.

Bruce Schneier is the author of seven books, including Applied Cryptography (which Wired called "the one book the National Security Agency wanted never to be published") and Secrets and Lies (described in Fortune as "startlingly lively...¦[a] jewel box of little surprises you can actually use."). He is also Founder and Chief Technology Officer of Counterpane Internet Security, Inc., and publishes Crypto-Gram, one of the most widely read newsletters in the field of online security.

Bruce Schneier is the author of seven books, including Applied Cryptography which Wired called "the one book the National Security Agency wanted never to be published" and Secrets and Lies, described in Fortune as a "startlingly lively jewel box of little surprises you can actually use." He is also founder and Chief Technology Officer of Counterpane Internet Security, Inc., and publishes Crypto-Gram, one of the most widely read newsletters in the field of online security.

"Does arming pilots make flying safer? Computer security guru Schneier applies his analytical skills to real-world threats like terrorists, hijackers, and counterfeiters. BEYOND FEAR may come across as the dry, meticulous prose of a scientist, but that's actually Schneier's strength. Are you at risk or just afraid? Only by cutting away emotional issues to examine the facts, he says, will we reduce our risks enough to stop being scared." -- Wired

"Schneier provides an interesting view of the notion of security, outlining a simple five-step process that can be applied to deliver effective and sensible security decisions. These steps are addressed in detail throughout the book, and applied to various scenarios to show how simple, yet effective they can be....Overall, this book is an entertaining read, written in layman's terms, with a diverse range of examples and anecdotes that reinforce the notion of security as a process." --Computing Reviews

"Schneier is a rare creature... Although he made his name as an alpha geek in cryptography... [he] can also speak to laypeople about the general security matters that increasingly touch all of our lives." -- Business Week

"Once again Schneier proves that he is the one of few people who indeed understands security, and what is more important and more difficult, can explain complex concepts to people not specializing in security. Whatever your trade and whatever your background, go ahead and read it ..." -- itsecurity.com

"In his new book, 'Beyond Fear', Bruce Schneier -- one of the world's leading authorities on security trade-offs -- completes the metamorphosis from cryptographer to pragmatist that began with Secrets and Lies, published in 2000." -- infoworld.com