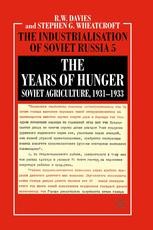 This book examines the Soviet agricultural crisis of 1931-1933 which culminated in the major famine of 1933. It is the first volume in English to make extensive use of Russian and Ukrainian central and local archives to assess the extent and causes of the famine. It reaches new conclusions on how far the famine was 'organized' or 'artificial', and compares it with other Russian and Soviet famines and with major twentieth century famines elsewhere. Against this background, it discusses the emergence of collective farming as an economic and social system.

R. W. DAVIES is Emeritus Professor of Soviet Economic Studies in the Centre for Russian and East European Studies, University of Birmingham, UK, of which he was the foundation director. He has published many books and articles on Soviet history, including Soviet History in the Gorbachev Revolution, Soviet History in the Yeltsin Era, Soviet Economic Development from Lenin to Khrushchev, and four previous volumes in the series The Industrialisation of Soviet Russia. He collaborated with E. H. Carr on vols. 9 and 10 of The History of Soviet Russia. He is an honorary life member of the British Association of Slavonic and East European Studies.

STEPHEN G. WHEATCROFT is Professor in Russian and Soviet History at the University of Melbourne, Australia, where he was the First Director of the Centre for Russian and Euroasian Studies. He has written many articles on agriculture and population in the Russian Empire and the Soviet Union.

Reviews of The Soviet Economy in Turmoil, 1929-1930 (volume 3 of the Industrialisation of Soviet Russia)

'Like the first two volumes in this series, this volume is a model of vigorous scholarship. Davies' research is impeccable, and simply unsurpassed in Western Sovietology. The writing is clear and often gripping.' - Lynne Viola, Russian History

'If the purpose of understanding the past is to better understand the present, then this book will be important reading for all interested in the Soviet industrialisation process and both its short-term and long-term outcomes. This book is a worthy fourth volume to the Industrialisation of Soviet Russia series. It is surely destined to become the standard work on its subject.' - Robert C. Stuart, American Historical Review

'This volume enormously enhances our understanding of Stalin's great breakthrough. Surely this is required reading for all concerned with the Stalin years.' - Hirokai Kuromiya, Russian Review

Reviews of Crisis and Progress in the Soviet Economy, 1931-1933 (volume 4 of the Industrialisation of Soviet Russia)

'Davies thus manages to convey not only the substance but also the passion of policymaking, not only the (generally) failing living standards of most soviet citizens but also their strategies for coping when they could cope; and not only the amplitudes of production but also the texture of the time. The complimentary volume on agriculture is eagerly awaited.' - Lewis Siegelbaum, The Russian Review

'With his usual calm approach, free of politicising, the author, firmly grounded in his subject, describes in detail all the main aspects of the economic history of the three years in which Soviet society survived another crisis and the foundations were laid for future economic growth.' - Svobodnaya mysl (Moscow)

'Robert Davies is unquestionably among the most prolific and distinguished scholars in the field of history and the leading authority on Soviet industrialisation. His multi-volume history of the Soviet economy during the 1930s is not only a mammoth undertaking, but one of great importance to our understanding of Stalinism and Soviet history more generally.' - David L. Hoffmann

'...Davies has made another enormous contribution to our understanding of Soviet industrialisation. We eagerly look forward to future volumes in this series.' - David L. Hoffmann, Slavic Review

'... anyone who wants to follow in detail the economic and demographic history of the rural transformation of Soviet Russia can do no better than consult this magisterial volume.' - Peter Gatrell, Business History