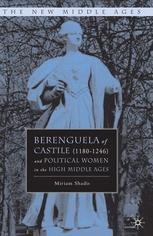 The women in the family which ruled thirteenth-century Castile used maternity, familial and political strategy, and religious and cultural patronage to secure their personal power as well as to promote their lineage. Leonor of England, and her daughters Blanche of Castile (queen of France), Urraca (queen of Portugal), Costanza (a Cistercian nun of Las Huelgas) and Leonor, (queen of Aragon) provide the context for a study focusing on Berenguela of Castile, queen of Leon through marriage and of Castile by right of inheritance, whose most significant accomplishment was to enable the successful rule of her son Fernando.

MIRIAM SHADIS holds an appointment as Research Scholar at Ohio University, where she also teaches in History and has taught in Women's Studies.

'Shadis' Berenguela of Castile is a valuable and significant contribution to our understanding of the role and place of royal women in politics (or, as she puts it, "female rulership"), of their significant political and cultural roles in medieval society, and of their ability to act as co-rulers or as queens on their own. Although most medievalists working on the kingdom of Castile know of Berenguela's unique role as queen and as mother of Ferdinand III, there are no modern studies of her reign and life until Shadis' book. As such, Berenguela of Castile is a pioneer work, dealing with a topic hitherto misunderstood or ignored by recent scholarship." - The Medieval Review

'Berenguela of Castile is a major addition to studies of queenship and of Iberia especially. Not only does it bring scholarly attention to an individual monarch who has been often overlooked, it also interrogates the place of women - wives and especially mothers - within the jointly ruled monarchy of western Iberia.' - American Academy of Research Historians of Medieval Spain

'Shadis has built an outstanding piece of political history and history of the genre which greatly enriches our historical knowledge and helps lay the groundwork for further and necessary approaches to the relationship between power, politics, and women in the medieval past.' - Hispania

'Under Shadis's deft analysis, a whole new view of Berenguela emerges; one who was not the victim of political events, but rather the architect of them.' - Medieval Feminist Forum

'This book is thus more than just the biography of one medieval queen; it is an invitation to scholars of medieval queenship to situate their own subjects within a new analytical framework: one that is actively engaged with what it meant to be a female lord in particular without ignoring other important factors that at times transcended gender.' - Marie A. Kelleher, California State University, American Historical Review

"This is an important study of medieval political history. Shadis convincingly critiques scholarship that dismisses Berenguela as 'queen for a day,' arguing instead that Berenguela's famous grant of kingship to Fernando in 1217 was co-rulership, not abdication.She vividly presents a superbly talented ruler who defied categorization in her lifetime and whose complex and contradictory life provoked a lively discourse on women's rule and virility as a component of kingship. Deftly linking queenship, feminist, women's, and masculinity studies, this book is at the forefront of political history." - Theresa Earenfight, Associate Professor, Seattle University and author of The King's Other Body: María of Castile and the Crown of Aragon

"Berenguela of Castile (1180-1246) and Political Women in the High Middle Ages provides a thorough and thoughtful investigation not only of the life of this medieval queen, but also of her kinswomen and peers. The Berenguela who emerges from these pages was a force to be reckoned with. Shadis's analysis of the texts also demonstrates how useful previously mined sources can be when viewed through the lens of women's agency rather than oppression. This book has much to offer and will be of interest and use to all who study the lives of aristocratic and royal women." - Amy Livingstone, Wittenberg University