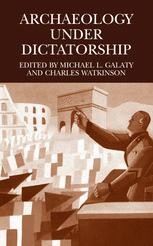 Archaeological knowledge is not created in a vacuum and our understanding of the past is profoundly affected by political ideologies. In fact, a relationship between politics and archaeology develops to some degree in every nation, regardless of social and economic circumstances.

The connections between politics and archaeology become most visible, however, within a totalitarian dictatorship, when a dictator seeks to create and legitimize new state-supported ideologies. Any dictator may attempt to control and exploit the past, often by directly controlling archaeologists. The degree to which a nation's archaeological system may continue to be affected after the fall of the dictator depends upon both the previous regime's ideological position and its level of dependence upon archaeology, and the response of archaeologists to the regime, collectively and individually.

This volume aims to provide a theoretical basis for understanding the specific effects of totalitarian dictatorship upon the practice of archaeology, both during and after the dictator's reign. The nine essays explore experiences from every corner of the Mediterranean; from the heartlands of Italy, Spain and Greece, to the less well-known shores of Albania and Libya. With its wide-range of case-studies and strong theoretical orientation, this volume is a major advance in the study of the history and politics of archaeology. The Mediterranean focus will also make it thought-provoking reading for classical archaeologists and historians.