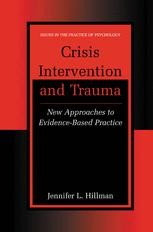 Recent findings from an American Psychological Association task force suggest that one in four therapists will experience patient suicide, and that one in eight will feel threatened by patient violence during their career. Experts from this task force have also noted that clinicians receive virtually no formal training or coursework in crisis intervention. Despite the increasing need for professional services among members of the general population, current practitioners have few texts available that provide step-by-step, detailed information about how to engage in crisis intervention, and how to integrate recent, empirical research findings into theory and practice. This volume helps bridge this critical gap by providing a theoretically advanced, yet practical guide to crisis intervention.
Particular attention is given to the role of violence within our culture, patient suicide, school and workplace violence, long-term sequelae of trauma, clinical assessment and risk management, professional boundaries and burn-out, domestic violence, and the neurophysiology of trauma, as well as the needs of typically underserved patient populations including minority group members, older adults, gays and lesbians, and children. The text also features critical reviews of controversial topics, including EMDR, critical incident stress debriefing, recovered memories, dissociative identity disorder, and alternative medicine.
The material will appeal to psychologists, social workers, and therapists, as well as practitioners in allied professional fields such as nursing, criminal justice, pastoral care, and education. Crisis intervention and trauma counseling: Emergent issues in theory and practice represents an essential addition to any clinician's personal library.