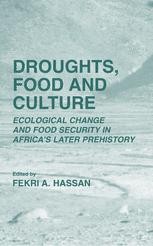 Recent droughts in Africa and elsewhere in the world, from China to Peru, have serious implications for food security and grave consequences for local and international politics. The issues do not just concern the plight of African peoples, but also our global ecological future.
Global climatic changes become manifest initially in regions that are marginal or unstable. Africa's Sahel zone is one of the most sensitive climatic regions in the world and the events that have gripped that region beginning in the 1970's were the first indicator of a significant shift in global climatic conditions.
This work aims to bring archaeology with the domain on contemporary human affairs and to forge a new methodology for coping with environmental problems from an archaeological perspective. Using the later prehistory of Africa as a comparison, the utility of this methodological strategy in interpreting culture change and assessing long-term response to current, global climatic fluctuations is examined and understood.

"This is a must reading for serious students of African prehistory as it merges into history."
(Choice, 40:4 (2002)
"The Volume's geographically based organization is advantageous. It allows the reader to pinpoint the research themes dominating the various regions. Thus, mobility strategies, population dynamics, and political upheavals account for changing land use due to desertification across Southwest and Central Asia. This book succeeds in demonstrating the range of methodological and heuristic templates currently applied to human ecological modeling in marginal environments. A corollary and sobering observation, independently noted in each study area, is that archaeology confirms and often accurately gauges historic trends."
(Journal of Anthropological Research, 59 (2003)
"This book is an important pioneering study that brings together in 17 chapters the evidence for changes in climate that occurred in Africa during the last 10,000 years or so, and the observed human responses to those changes. It is an attractive book, well-designed with numerous clear and informative illustrations. ...all archaeologists should read the first two chapters by Hassan, who sets the stage for and summarizes the most important data in the book. ...should be read not only by those interested in problems of climate change in Africa and elsewhere, but by anyone interested in the interaction between human behavior and climate change. We urge Hassan to call another conference on Holocene climate variability and human response in North Africa. He should also produce another book, because more detailed summaries like many of these in this volume will rapidly move us toward his goal "to situate archaeologuy within the domain of contemporary human affairs"."
(African Archaeological Review, 20:2 (2003)
"Implications with contemporary climate events (recurrent droughts in Africa) and their impacts on food security are evident. Interactions amongst climate changes, evolution of food producing systems, evolution of societal organization including mass movements in search of less hostile environment, evolution of culture, art and technology, are all intertwined and complicated. The chapters of this remarkable volume dispel a good deal of the myth that relates to these socio-evolutionary topics."
(The Environmentalist, 23 (2003)

"The substantive papers of this volume remain data-grounded but theoretically informed, and bring together new information on archaeology and the interlocking of subsistence activities with their environmental context." (Karl W. Butzer, Holocene, 14, 2004)

"At the very least, all archaeologists should read the first two chapters by Hassan, who sets the stage for and summarizes the most important data in the book.  It is also a book that should be read not only by those interested in problems of climate change in Africa and elsewhere, but by anyone interested in the interaction between human behavior and climate change." (Fred Wendorf and Romuald Schild; African Archaeological Review, 20:2)

"The book, edited by F. Hassan, is an excellent and accomplished attempt to summarise the archaeology of North Africa as the historical relationship between the people and climatic change during the Holocene. This is also a book with wider implications. … This is a book I warmly welcomed and read with interest, as it is full of new data and ideas." (Marco Madella, Geoarchaeology, March, 2005)