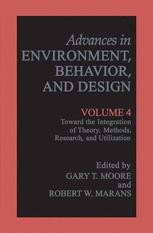 Toward the Integration of Theory, Methods, Research, and Utilization

This fourth volume in the Advances in Environment, Behavior, and Design series continues the intent of earlier volumes by exploring new directions in the multidisciplinary environment-behavior (EB or EBS) field. The series is organized around a framework of theory, methods, research, and utilization that some say has defined the field for the past 15 years. This fourth volume is devoted to chapters that explore the integration of theory, quantitative and qualitative research, and utilization in policy, planning, and architec­ ture. The authors selected for this volume exemplify the multidisciplinary character of the field-they have been selected from architecture, environ­ mental psychology, environmental studies, housing research, landscape ar­ chitecture, social anthropology, social ecology, urban design, and urban planning; from academe and practice; and from Australia, Europe, and North America. HISTORY OF THE ADVANCES SERIES The idea for the series emerged in 1983 at meetings of the Board of Directors of the Environmental Design Research Association (EDRA). Sev­ eral publishers were contacted about the possibility of an EDRA Annual Review. Eliot Werner at Plenum Press expressed great interest but suggested that an Advances series would be more appropriate since publication could be tied to a less specific timetable. EDRA, Plenum, and the editors signed a contract in June 1984 for three volumes, with an open door for oral agreements between Plenum and the editors after that time. Four volumes have been published (Volume 1, 1987; Volume 2,1989; Volume 3,1991; and the current Volume 4), each containing 10 to 12 chapters.