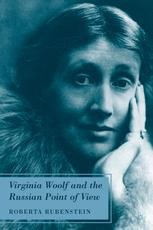 Virginia Woolf and the Russian Point of View

This book brings together Virginia Woolf's essays and book reviews on Russian literature; her unpublished reading notes on Tolstoy, Dostoevsky, Chekhov, and Turgenev; and new and insightful scholarly commentary concerning her response to each of the major Russian writers.

ROBERTA RUBENSTEIN is Professor of Literature at American University, USA and author of Home Matters: Longing and Belonging, Nostalgia and Mourning in Women's Fiction.

"Rare are the scholarly studies that combine timeliness, impressive originality, and acutely precise and detailed analysis with a gently reassuring sense that we are not so much engaged in 'criticism' as being invited to read over a writer's shoulder and catch the very passions and wonder that they might have felt as they read. What a delight then to come at last upon Roberta Rubenstein's Virginia Woolf and the Russian Point of View." - Woolf Studies Annual

"Rubenstein's readings and the discussions are never other than subtle, perceptive, and persuasive." - Virginia Woolf Bulletin

"A scrupulous and illuminating exploration of Virginia Woolf's long and deep engagement with early-twentieth-century 'Russophilia,' Rubenstein's new study examines the impact of such major figures as Dostoyevsky, Tolstoy, Chekhov, and Turgenev on both Woolf's critical theory and her aesthetic practice. The book will be welcomed not only by Woolf scholars but, more generally, by students and theorists of modernism and narrative." - Sandra M. Gilbert, Distinguished Professor Emerita, University of California, Davis

"In this much needed study of the 'imaginative residue of the Russian writers' in Virginia Woolf's thought and work, Rubenstein convincingly shows how reading and re-reading Dostoevsky, Tolstoy, Chekhov, and Turgenev at crucial times in her career affected Woolf's development and evolution as a modernist. Thorough consideration of cultural forces, close readings of numerous texts both British and Russian, and meticulous research inform this clearly written argument, and as a bonus, Rubenstein invites us into Woolf's workshop by providing well-footnoted transcriptions of all the available reading notes, drafts, and typescripts on the Russians in the archives. What a valuable contribution to Woolf studies!" - Beth Rigel Daugherty, Otterbein College and co-editor of Approaches to Teaching Woolf's To the Lighthouse

"Virginia Woolf and the Russian Point of View is distinguished by its clarity, elegance of prose, lack of jargon, and careful analysis of possible Russian influence on Woolf's fiction. Readers also gain an introduction to individual Russian texts through Rubenstein's eyes as she trains her gaze on these texts as if looking over Woolf's shoulder." - Ruth O. Saxton, Professor of English, Mills College