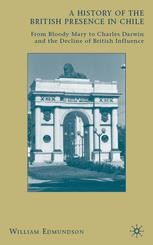 A History of the British Presence in Chile

This book sets out to narrate the contributions to and influence on the history of Chile that British visitors and immigrants have had, not as bystanders but as key players, starting in 1554 with the English Queen 'Bloody Mary' becoming Queen of Chile, and ending with the decline of British influence following the Second World War.

William (Eddie) Edmundson works as a consultant and writer in Recife, Brazil, following a career in teacher training and management with the British Council that has taken him to Colombia, Mexico, Brazil, Chile, and his most recent appointment as Director Cuba. Fluent in Spanish (and Portuguese), he started research into the history of the British presence in Chile while Director of the Chilean-British Institute in Concepción, in 1984-1990. His most recent book also has a strong focus on Chile - The Nitrate King: A biography of John Thomas North, published April 2011. William Edmundson has also published widely on English language teaching, and on the survival of steam locomotives in Latin America.

'[Edmundson] has written such an excellent book which ought to appeal to anyone with an interest in Chile. Well-researched and concise, it is an appetite-warming guide for further reading and should be recommended to newcomers planning to spend much time in the country.' - Chilean News, (the Bulletin of the Anglo-Chilean Society in London), Year 66, No. 376, 10-11. April 2010

'As the modern-day visitor can readily confirm, Chilean attitudes toward Britain are warm and admiring. William Edmundson's book is a well-documented account of how those ties were formed, starting even before the war of independence was won. He has researched extensively the motives industrial, commercial, and scientific, among others that brought adventurous and enterprising Britons to Chile, many adopting the country as their new homeland. This is an intriguing, informative book, relevant to the times, and worthy of inclusion in any Foreign Studies curriculum.' - Duncan Campbell, Site Administrator, The British Presence in Southern Patagonia

"This book provides a lot of useful reference material for anyone with Chilean ancestors or whose ancestors pursued careers there." - Jessie Denholm, The Scottish Genealogist