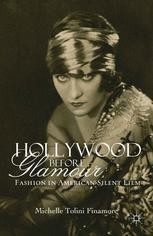 This exploration of fashion in American silent film offers fresh perspectives on the era preceding the studio system, and the evolution of Hollywood's distinctive brand of glamour. By the 1910s, the moving image was an integral part of everyday life and communicated fascinating, but as yet un-investigated, ideas and ideals about fashionable dress.

Michelle Tolini Finamore has a PhD from the Bard Graduate Center, New York, USA, and is Curator of Fashion Arts at the Museum of Fine Arts, Boston, USA. She has held posts at the Costume Institute at the Metropolitan Museum of Art, Sotheby's, the Rhode Island School of Design and the Fashion Institute of Technology. She most recently co-authored Jewelry by Artists: In the Studio, 1940–2000. She has lectured widely and written numerous articles for both the scholarly and popular press.

"This book has the potential to make a contribution to many fields: fashion and film history, film theory, design history and popular culture studies. It is extremely well written, well referenced, well argued and well researched." - Caroline Evans, Professor of Fashion History and Theory at Central Saint Martins, University of the Arts London, UK

The surprise is that in spending five years researching addressing the ways in which the nascent American fashion and film industries intersected... a hundred years ago, Finamore has unearthed so much original research relevant to issues again facing the industry and culture at large. From the Swanson archive in Austin and the Library of Congress to the British Film Institute to rare original films and newsreels, Finamore's topics piece together a cultural history of two industries on the cusp, and deserve a readership outside of academia." - Nathalie Atkinson, Canadian National Post