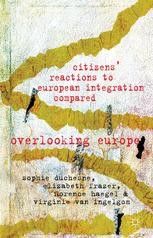 Pre-financial crisis, EU citizens were 'overlooking' Europe ignoring it in favour of globalisation, economic flows, and crises of political corruption. Innovative focus group methods allow an analysis of citizens' reactions, and demonstrate how euroscepticism is a red herring, instead articulating an indifference to and ambivalence about Europe.

The last decade has witnessed the publication of major qualitative comparative studies of citizens' views and experiences of European integration. None can match, however, Overlooking Europe's theoretical and methodological rigor, nor its intellectual honesty. In a rare instance of genuine and successful collective work, the authors demonstrate and provide a highly sophisticated and original account of the ordinary citizens' cognitive and affective distancing with respect to the European integration process on the eve of Europe's 2008 debt and fiscal crisis. This account largely contradicts previous conclusions drawn from the analysis of public opinion survey data and forever changes our interpretation of political developments in the European Union since the late 1980s. Definitely a 'must' for those interested in European integration and in learning qualitative research methods."

'This book takes us backstage in a refreshing way to help us understand the thinking process and the ambivalences that people in different countries feel about the idea of Europe.'

William Gamson is Professor of sociology at Boston college and co-director of the Media Research and Action Porject.

'For their focus group data, the authors take a very useful interpretive approach. I especially appreciated the way they investigated a political topic by encouraging debate that helped in understanding different political positions. This method for carefully studying similarities and differences is exactly the kind of innovation that we need in focus group research.

David Morgan is Professor of Sociology at Portland State University

'The political normalisation of European integration is in the heart of this very beautiful book. It will interest the specialists of the European studies as well as the readers attentive to the methodological innovations. It is an excellent catalogue of some the richest, most innovative and empirically solid research in comparative political science'

Yves Déloye, is Professor of political science at Sciences Po Bordeaux and the editor of the Revue française de science politique.

'In a field replete with studies of citizen's views of the EU, Overlooking Europe stands alone for the originality of its focus group approach, providing new insights into how Europeans from different member-states look at and, indeed, 'overlook' Europe differently. The book explodes many of the received assumptions about European citizens whether as increasingly pro-European or Eurosceptic to show that mostly they simply don't know, and very often don't care. Overlooking Europe, in brief, is a book that should not be overlooked.'

Vivien A. Schmidt is Jean Monnet Professor of European Integration and Director of the Center for the Study of Europe, Boston University.