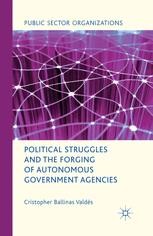 Political Struggles and the Forging of Autonomous Government Agencies

Argues that autonomous agencies are not the result of a systematic design, but are produced by the interactions of political and bureaucratic forces. The case studies illustrate how political struggles between politicians and bureaucrats can create a muddle of agencies that lack coherence and are subject to conflicting levels of political control.

CRISTOPHER BALLINAS VALDÉS is Associate Professor in Public Policy, at the Instituto Tecnológico Autónomo de México, Mexico City, Mexico. He specialises in the study of executive government and the effects of politics and institutions on policy outcomes - the politics of policies. He has also worked as Senior Adviser to three deputy ministers at the central government in Mexico and possesses extensive high-level experience in policy design and implementation.

"'Anyone who thinks the rise of autonomous government agencies is just the result of neoliberal economic fashions should read this book. Dr. Ballinas Valdés offers a penetrating analysis of Mexican bureaucratic politics, but also gives us a more general account of how to understand bureaucratic autonomy and what shapes it."

"This book is an essential corrective to simplistic theories about the genesis and role of autonomous agencies. Ballinas Valdés explores the struggle among politicians and bureaucrats and shows how it generates great variety in the structure of agencies. Political conflict produces results that frequently confound the original intentions of the agencies' promoters."

"This excellent study on the surge of the regulatory state in Mexico in recent decades carries out an in-depth analysis of the role of domestic forces involved in regulatory agentification, beyond one-dimensional arguments. Bureaucrats and politicians' interests and perceptions are perfectly illuminated; making clear that their policy preferences are shaped by institutional designs, but also that their major struggles were largely related to pursuing institutional change, as a way to affect public policies more permanently."